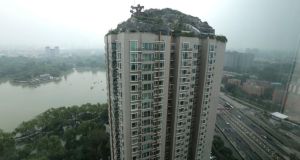 The privately built villa, surrounded by imitation rocks, on the roof of a 26-storey residential block in Beijing. Its owner, Zhang Biqing, says he will have it torn down in the next few weeks. Photograph: Reuters

It was too good to last. A Byzantine rooftop villa, a folly complete with rocky crags, shrubberies, bushes and trees, was known to the neighbours as the “most outrageous illegal structure” after it was built on top of a 26-storey block of flats in the capital Beijing.

The villa looks like a cross between a villain’s lair from a James Bond movie and a mountain retreat, except it is set upon an apartment block on the western outskirts of Beijing.

Beijing authorities are now planning to demolish the strange structure. Haidian district urban management official Dai Jun said authorities would tear the structure down in 15 days unless the owner does so himself or presents evidence it was legally built.

‘Public pressure’
The structure was built by Zhang Biqing, who made his money in traditional Chinese medicine.

“City officials already told me to knock it down, so I’m not going to bargain with them and try and hang on to it. I don’t want the municipal authorities to be under so much public pressure, and I will tear it down within the next 15 days,” he said in an interview with Beijing News.

“I know it’s illegal and this behaviour is not appropriate, that’s why I used light material so I can demolish it more easily,” he told the paper.

Zhang’s neighbours have complained repeatedly about the villa, which covers an area of 800sq m. They claimed the six-year construction process had damaged pipes and the building’s structural integrity and that the loud, late-night entertaining that goes on inside keeps them up at night.

“They’ve been renovating for years. They normally do it at night,” said one resident on the building’s 25th floor, who added that efforts to reason with the owner were met with indifference. “He was very arrogant. He couldn’t care less about my complaints,” the neighbour, who declined to give his name , told local media.

There were outraged comments online.

Meng chan tangchao said for six years the villa was illegal, but there had been only a fuss when photographs of it were splashed all over the Chinese media this week.

“Why did no municipal department ask about this? Is it illegal or did someone try to cover it up? Shouldn’t the relevant department be investigated?”

Another commentator on Sina Weibo, Xubin Boshi, wrote: “I realised three things from Master Zhang. Illegal structures cost nothing, being a bad person costs nothing and suppressing the little people costs nothing.”