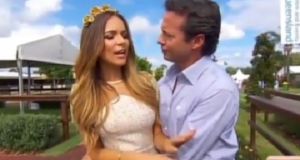 Radulovic, a former Miss Universe contestant, was midway through a broadcast on her first day as a fill-in weather reporter for Weekend Sunrise on Channel Seven when the incident happened.

McLachlan, a friend of Radulovic, awkwardly embraced the reporter before she laughingly pushed him away.

“There’s been stuff all week on that . . . I’m not Chris Gayle,” McLachlan joked.

However, viewers were unconvinced, and took to social media to draw comparisons between McLachlan and Gayle, who last week tried to pick up a Channel Ten sports reporter during a live interview.

“Hamish McLachlan’s actions seem to be receiving less condemnation than Gayle’s. Wonder why,” one person said on Twitter.

Weekend Sunrise’s Facebook page was also peppered with criticism over the incident.

“I’m confused! One minute you guys are discussing Chris Gayle’s crappy behaviour and the next you have some horse-racing bloke copping a feel of your weather presenter!” one viewer wrote.

Another viewer said that Channel Seven needed to do more to protect women.

“Please advise what actions are you taking to protect your female employees’ right to not be disrespected, demeaned, groped and/or sexually harassed both off- and on-air,” one wrote.

Both McLachlan and Radulovic apologised for the incident later on the Saturday morning programme, .

“I understand people have made stuff of it on social media and if I’ve offended anyone at home I’m apologising for that absolutely,” McLachlan said.

Radulovic said she was not offended.

“Not at all, I’m so sorry as well guys. I did not think twice about it,” she said, before noting that the pair were friends.

“Like Hamish said, we’re colleagues and friends and we were just chatting like we normally do off-camera.”

“Edwina, I’m sorry if I’ve offended you [or] anyone watching at home. Mon and I didn’t think anything of it and now I got the phonecall saying people have made a lot of it so I apologise to whoever I’ve offended,” he said.

While the vast majority of social media commentary about the hug was critical, a few users backed McLachlan and lamented the rise of political correctness.