Official death toll in sinking of ‘Eastern Star’ in China rises to 75, but more than 360 still unaccounted for 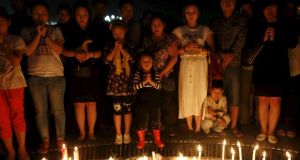 Local residents pray at a candlelight vigil to pay their respects to the passengers of the sunken cruise ship on the Yangtze River, at a public square in Jianli, Hubei province, China, on Thursday. Photograph: Kim Kyung-Hoon/Reuters 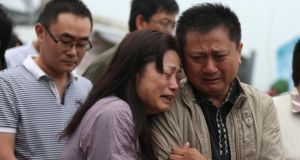 Relatives of victims of a capsized tourist ship cry on the banks of the Yangtze River in Jianli, Hubei province, China, on Thursday. There were 456 on board the Eastern Star when it sank in bad weather June 1st. Photograph: Wu Hong/EPA

Distraught relatives of the nearly 400 passengers still missing from the capsized cruise ship in the Yangtze River have clashed with authorities, demanding to know why the rescue mission is taking so long and angry at the lack of information about their loved ones.

The multi-storey Eastern Star sank on Monday at about 9.30 pm, with 458 people aboard after what has been described as a cyclone hit the ship en route from Nanjing to Chongqing.

A Yangtze River cruise is one of the most popular tours for China’s emerging middle class, and most of those on board were retired.

As we arrived at the site on Thursday, a convoy of two dozen white -and-grey minivans zipped past us, hazard lights on, each bearing a number on the windscreen. These are being used to transport special temperature-controlled coffins, and they were most likely carrying the latest batch of 10 bodies recovered from the overturned hulk of the ship.

Huang Zhen, a senior official in Jianli County, said in an update for reporters that the latest discovery of 10 more bodies brought the death toll to 75, with more than 360 still unaccounted for.

Outside the crematorium, there was still a cordon of People’s Armed Police and soldiers halting access to the site.

There are hundreds of relatives in Jianli, and they are becoming increasingly frustrated at the slow pace of information. Dozens of people broke through these cordons on Thursday, demanding more information, and angry that the rescue mission was taking so long.

One relative, whose mother had been aboard the ship, emerged from a tent across from the crematorium, where she had been in discussions with officials.

“Every time I come here to ask for information, they say there are procedures that we need to follow, but I don’t know what these procedures are,” she said, visibly angry. She was quickly led away by officials as media surrounded her.

At 8pm local time on Thursday the search-and-rescue team began the process of righting the capsized cruise ship from the 15 metres of water in which it was submerged, according to the Ministry of Transport . Divers have been cutting holes in the hull, searching for survivors, then welding the holes shut to maintain buoyancy.

The general consensus was that after more than 72 hours since the ship capsized, the chances of finding anyone else alive were extremely small.

However, Li Qixiu of the Naval University of Engineering, told the Xinhua news agency that there was still a chance that people could be alive on the Eastern Star. “The ship sank in a very short time frame, so there could still be air trapped in the hull. That means there could still be survivors,” he said.

The main difficulty rescuers face now is to keep the ship steady to stop it sinking further during the operation to right it, he said. Divers had managed to attach steel cables to the hull and the plan was to support the ship with cranes while rescuers searched inside.

The country’s top leadership, the standing committee of the Communist Party’s politburo, met on Thursday to discuss the crisis and President Xi Jinping, who presided over the meeting, called on rescuers to “take all possible measures” to save lives, as well as urging a “serious investigation” into the cause of the tragedy.

“Pledging to send more medical experts and resources, the leaders also noted the importance of caring for passengers’ families and promised timely, accurate and transparent releases of information from the investigation,” Xinhua reported.

There has been a serious clampdown on the media. Only the television statoon CCTV, the Xinhua news agency and the local Hubei provincial broadcaster are allowed access to the riverside site, according to domestic journalists. There was a brief tour for foreign journalists near the site on Wednesday but generally the flow of information was being kept to a minimum.

At the Jianli People’s Hospital, we went to the intensive care unit where we had been told on Wednesday to come back the next day so we could speak to a doctor about the survivors.

On reaching the ICU, two men approached saying they were friends of the children of one of the survivors, and they did not want to do an interview. The nursing staff said that all interview requests had to go through the hospital.

We later discovered that the two men were government officials enforcing a ringfence around the survivors and their families.

Jianli is a county of around 1.6 million, where the main crop is rice. It used to be a busy port a few hours from Wuhan, when people still used the Yangtze to get to Nanjing, but now the water level in the river has dropped too much and people go by road or rail.

Local people have reached out to the relatives, helping where they can, putting up yellow ribbons in solidarity. One hotel, the Qianxi, is offering free food and accommodation to family members looking for their relatives.

A senior Ministry of Civil Affairs official, Zhang Shifeng, said working groups from eight provinces had come to Jianli to look after the victims and their families.

“Medical staff are being sent from the eight provinces to Jianli to treat the injured. The work to console passenger families is going in a co-ordinated way inside Hubei and other eight provinces where the passengers were from,” Zhang told a news conference on Thursday.