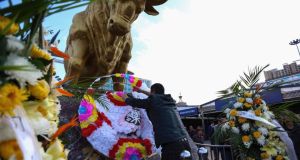 A man puts up a wreath outside Kunming railway station after the knife attack on Saturday that killed 29 civilians and left scores injured. Photograph: Wong Campion/Reuters

Chinese police have captured the remaining three suspects in Saturday’s knife attack on a train station in the southwestern city of Kunming that killed 29 civilians and left scores injured.

Four of the eight black-clad, machete-wielding attackers were shot dead by police at the station and an injured female suspect was also reportedly detained. The three remaining suspects were arrested yesterday, state media reported.

More than 130 people were also wounded during the attack and 20 remain in a critical condition, Chinese state media say.

The Kunming attack, and an incident late last year in which a car ploughed into pedestrians in Beijing’s Tiananmen Square have been blamed on separatists from the far-western region of Xinjiang.

There are 10 million Turkic-speaking Uighurs in Xinjiang, which borders Central Asia, and in recent years relations between them and the Han Chinese migrants coming into the province have become more and more difficult.

China has vowed to crack down on militants seeking to establish an independent state called East Turkestan. But it has also emphasised ethnic unity.

The US State Department described the attack as “an act of terrorism”.

“Based on the information reported by the Chinese media, this appears to be an act of terrorism targeting random members of the public, so we are calling this an act of terrorism,” State Department spokesperson Jen Psaki told a press briefing.

The State Department statement came not long after Chinese media accused Washington of double standards for its initial reluctance to use the phrase.

They also accused Western media of bias for not using the word “terrorist” and there were thousands of angry comments on Weibo, the Chinese version of Twitter.

An editorial in the People’s Daily slammed Western media for what it perceived as bias in describing the attack.

“Aren’t you talking about ‘human rights’? Have you seen those victims lying in a pool of blood?” it ran.

The most senior Uighur leader, the exiled Rebiya Kadeer, has urged calm after the attack, and asked Beijing not to “demonise” the Muslim Uighurs.

“At this time of heightened tensions, it is important for China to deal with the incident rationally and not set about demonizing the Uyghur people as state enemies,” said Ms Kadeer, president of the World Uyghur Congress, using the group’s spelling for the Uighur minority.

Many Muslim Uighurs object to Chinese curbs on their culture and religion, though authorities say they enjoy broad freedoms.

The Uighur service of Radio Free Asia reported yesterday that the eight assailants may have acted in desperation as they were a group of Uighurs who had fled Xinjiang trying to get to Laos, but were trapped in Yunnan.

The group had fled to Yunnan after a police crackdown in Xinjiang’s Hanerik township in Hotan prefecture last year.