Philippine President Rodrigo Duterte lashes out at US President Barack Obama, calling him a 'son of a whore' in Filipino, warning him not to raise the issue on extrajudicial killings when they meet at a regional summit in Laos. Video: Reuters 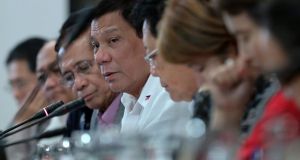 President Rodrigo Duterte’s (centre) remarks are the latest in a series of inflammatory statements which have alerted Washington. Photograph: EPA

Philippine President Rodrigo Duterte signalled growing tension between his country and the United States when he said that he would “cross the Rubicon” in relations with the US and forge “open alliances” with China and Russia.

Speaking to reporters at the presidential palace in Malacanang, Mr Duterte accused the US of “lording it over” its former colony, and said he had met Russian prime minister Dmitry Medvedev during the Asean meeting of southeast Asian leaders in Laos.

“I’ve been talking with prime minister Medvedev. We had a one-on-one meeting and I said, ‘I think I’m about to cross the Rubicon between me and the United States’,” said Mr Duterte. “I’m ready to not really break ties, but I will open up alliances with China and Russia.”

Quoted on the Rappler news site, Mr Duterte said the alliance would not be military. But he was concerned the US would not come to the Philippines’ aid if it were attacked because it needed the permission of Congress, which was not certain.

It is the latest in a series of remarks baiting the US by the Philippine leader, a populist approach that works with the domestic audience but is causing growing concern in Washington. The Philippines is a former colony of the US, until it became independent in 1946. The two countries signed a mutual defence treaty in 1951.

He has previously referred to Washington’s ambassador to the Philippines as a “gay son of a bitch”. And a bilateral meeting between Mr Duterte and Barack Obama was cancelled after the Philippine president called the US president a “son of a whore” following criticism from Washington about extrajudicial killings of drug dealers in the Philippines.

Deaths in the war on drugs have averaged more than 40 a day since Mr Duterte took office on June 30th.

He called for US special forces to be withdrawn from the restive southern province of Mindanao, where they are helping in the fight against Muslim rebels, although he subsequently rowed back on those comments.

He also issued a “f**k you!” to the European Union.

As well as causing concern among human rights groups, Mr Duterte’s war against drugs, coupled with his anti-US rhetoric, have unsettled international investors in the Philippines. The peso fell this week to its lowest level since 2009 and investors are selling off shares.

Meanwhile, China has been working hard to gain support of the Philippines for its territorial ambitions in the South China Sea.

His predecessor Benigno Aquino III brought a case to an international arbitration court in The Hague which found against Beijing’s claims to most of the South China Sea, a ruling Beijing refuses to recognise. Brunei, Malaysia, the Philippines, Taiwan and Vietnam all have rival claims.