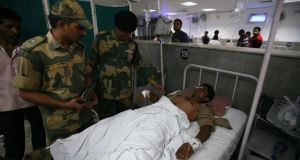 Members of India’s Border Security Force talk to soldier who was wounded after Pakistan Rangers opened fire on a post in Kanachak near the disputed Kashmiri border yesterday. Photograph: Mukesh Gupta/Reuters.

Pakistan has accused Indian troops of firing shells across the disputed border in Kashmir after last week’s killing of Indian soldiers set off a wave of skirmishes between the two nuclear-armed rivals.

Tensions along the 740km Line of Control that divides Kashmir flared lasrt Tuesday when five Indian soldiers were ambushed and killed in the Poonch region. New Delhi blamed the attack on the Pakistan army but Islamabad denied involvement.

Today, a Pakistani army official said a civilian was killed as a result of “unprovoked Indian shelling” in the Battal, Chirikot and Satwal sectors.

District administration officer Malik Ayub Awan said a family’s cattle also died in the firing before 4 am in a village about 500 metres from the Line of Control.

The two armies have been exchanging fire on the front line since Tuesday, straining a ceasefire agreement that has largely held on the border since November 2003.

Tit-for-tat shelling such as the latest incident are common along the Line of Control, but tensions have been high since the ambush, with India hinting at retaliation for one of the worst attacks since the neighbours signed the ceasefire.

Media have reported Pakistan might redeploy some of its troops from the Afghan border, where the army is fighting a separate Taliban-linked insurgency, to the eastern frontiers, but an army official said the option was not on the table.

India and Pakistan have been trying to restart stalled peace talks, possibly as early as this month, as well as a possible meeting between prime minister Manmohan Singh and his Pakistani counterpart, Nawaz Sharif, in New York in September.

India has deployed tens of thousands of soldiers in Kashmir to put down an armed revolt that began in 1989. In recent years, violence has ebbed, but there has been little movement on a political settlement.