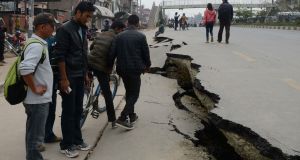 Residents of Kathmandu living in tent camps after Nepal’s powerful earthquake said on Tuesday that their biggest worry was a lack of safe drinking water, even as they endured their latest pelting of rain.

That and other claims of slow disaster relief have kindled growing public frustration here with the Nepalese government, which has struggled to deliver aid across this poor, mountainous country.

Since the earthquake struck Nepal on Saturday, killing more than 4,600 people at the latest count, the government has instituted disaster-response plans, galvanised the army, and received planeloads of aid every day from dozens of other countries, including India and China, Nepal’s two big rivals.

“Only this tent was provided by the government, but for everything else we have had to rely on our own labours,” he said as relatives swayed their heads in agreement. “You can see how many humans are in need.”

It is a common complaint in the tent camps across Kathmandu, the capital, where aftershocks have deterred many residents from sleeping indoors and where many older buildings have crumbled into piles of broken brick.

“Our primary, primary, primary goal is to rescue the people,” the official, Brig Gen Jagadish Pokharel, a spokesman for the Nepalese army, told a group of reporters after a briefing on the aid effort. “We are also trying to synchronise it and to distribute to the needy people.”

For a government fractured by political rivalries, juggling the demands of distressed citizens could become more difficult if the clean water and other aid fail to flow faster in coming days and blunt public frustration.

“The supplies are coming in. The challenge is to get them to people, especially those who are most vulnerable,” Peter Oyloe, the director for nutrition for Save the Children Nepal, said in a telephone interview.

“Water is going to be a big issue as people stay outside and continue to want to stay outside because of concerns about earthquakes and the sense that something may happen.” – (New York Times service)