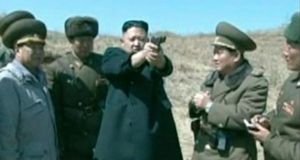 North Korea has advised embassies to consider moving staff out of the country and warned it cannot guarantee the safety of diplomats after April 10th, Britain said yesterday, amid high tension and a war of words on the Korean peninsula.

The requests come on the heels of declarations by Pyongyang that real conflict is inevitable, because of what it terms “hostile” US troop exercises with South Korea and UN sanctions imposed over North Korea’s nuclear weapons testing.

“The current question was not whether, but when a war would break out on the peninsula,” because of the “increasing threat from the United States”, China’s state news agency Xinhua quoted the North’s foreign ministry as saying.

UN secretary general Ban Ki-moon said he was deeply alarmed at the situation.

Earlier, South Korea deployed two warships equipped with advanced radar systems to both of its coasts to track missile launches by North Korea, as tension continued to grow on the Korean peninsula.“If the North fires off a missile, we will trace its trajectory,” a senior navy official told the Yonhap news agency.


On standby
The 7,600-ton Aegis destroyers are equipped with SPY-1 radar, which can track hundreds of targets as far as 1,000km away. The vessels have been on standby to track missile launches by Pyongyang.

North Korea is angry about joint US-South Korean military exercises and the imposition of UN sanctions after a third nuclear test in February. It has threatened to attack US territory and said nuclear conflict could break out at any time on the Korean peninsula in a month-long bout of sabre-rattling that has caused jitters in the region.

While military preparations continue apace, most Koreans in Seoul appear more irritated than angry about what is going on north of the border.

Top finance officials in Seoul have warned that the bout of uncertainty could have a long- term impact on markets. “In the past, [markets] recovered quickly from the impact from any North Korea-related event, but recent threats from North Korea are stronger and the impact may therefore not disappear quickly,” vice-finance minister Choo Kyung-ho said.


Seeking concessions
Analysts believe recent statements are aimed at winning concessions from the US rather than heralding armed conflict. “We do not believe that North Korea intends to attack South Korea, pre-emptively or otherwise, in the current cycle of threat projection,” the US think tank Nautilus said in a study.

Former Cuban leader Fidel Castro warned ally North Korea against war yesterday and described the current tensions on the Korean peninsula as one of the “gravest risks” for nuclear holocaust since the Cuban missile crisis in 1962.

Saying he spoke as a friend, Mr Castro (86) wrote in Cuban state media that North Korea, led by Kim Jong-un (30), had shown the world its technical prowess and now it was time to remember its duties to others.

1 Barry Cowen sacking: Lenihan questions why vetting did not flag Pulse record
2 Like ‘a grandfather at the sherry cabinet’: Trump’s meandering monologue
3 Covid-19: Ireland likely faces ‘imminent second wave’ due to reopening, experts warn
4 After only three weeks, Micheál Martin has created powerful enemies who will come back to haunt him
5 Taoiseach dramatically sacks Barry Cowen as minister over drink-driving controversy
Real news has value SUBSCRIBE