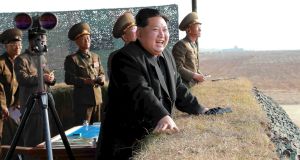 North Korea may launch a rocket that it says will carry an earth observation satellite as soon as Sunday, after bringing forward and shortening the time frame for the launch, the Japanese and South Korean governments said on Saturday.

North Korea had earlier told the International Maritime Organisation (IMO) it would launch the rocket some time between February 8th and February 25th, triggering international opposition from governments that see it as a long-range missile test.

Japan and South Korea said North Korea had issued a Notice to Airmen that the launch would take place some time between Sunday and the following Sunday, February 14th.

Isolated North Korea says it has a sovereign right to pursue a space programme. But it is barred under UN Security Council resolutions from using ballistic missile technology.

Tension has been high on the Korean peninsula following the North’s fourth nuclear test, on January 6th. A rocket test now would compound fears about North Korea putting a nuclear warhead on a missile that could reach not only South Korea and Japan but possibly even the west coast of the United States.

North Korea last launched a long-range rocket in December 2012, sending into orbit an object it described as a communications satellite.

The new time frame was set amid rising expectations that a launch was likely to happen soon, with US government sources on Friday saying North Korea could be ready by the US Super Bowl kickoff on Sunday, which will be Monday in Korea.

The IMO, a United Nations agency, did not immediately respond to a Reuters query for confirmation. The International Telecommunication Union, another UN agency, said it was not aware of an amended time frame for the launch from North Korea.

North Korean state media had not reported on the changed schedule.

On Friday, US president Barack Obama spoke by telephone with president Xi Jinping of China, North Korea’s main ally and neighbour, and agreed that a North Korean launch would represent a “provocative and destabilising action,” the White House said.

“The leaders emphasized the importance of a strong and united international response to North Korea’s provocations, including through an impactful UN Security Council Resolution,” the White House said.

The United States and China have appeared divided over how to respond to North Korea, with Washington urging tougher sanctions and Beijing stressing the need for dialogue.

Japan has said it would shoot down the rocket if it threatens the country, and on Saturday accelerated the deployment of two additional PAC-3 missile units in response to the revised launch time frame, a Japanese defence ministry official said.