No fresh damage noted at Fukushima after ocean quake

No immediate reports of damage in Japan after 7.1 magnitude tremor this evening 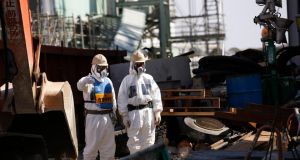 The operator of Japan’s wrecked Fukushima nuclear plant (above) said this evening there was no damage or spike in radiation levels at the station after a large earthquake struck in the ocean east of Japan. Photograph: Reuters

The operator of Japan’s wrecked Fukushima nuclear plant said this evening there was no damage or spike in radiation levels at the station after a large earthquake struck in the ocean east of Japan, triggering a small tsunami.

There were no immediate reports of damage on land from the quake, classified as magnitude 7.1 by the Japan Meteorological Agency, which struck about 370km (230 miles) out to sea. Earlier the agency said the quake had a magnitude of 6.8.

A spokesman at Tokyo Electric Power Co (Tepco), operator of Fukushima, said some workers had been ordered to evacuate to higher ground after the quake, but that there was no damage or change in readings at radiation monitoring posts around the plant.

Ships were seen leaving a port south of the Fukushima Daiichi nuclear power station - where three reactors had meltdowns in 2011 after an earthquake and tsunami knocked out cooling and power - as a precaution after the tremor. Buildings shook as far away as Tokyo, 230km south of the nuclear plant.

The Japan Meteorological Agency issued a “yellow” warning shortly after the 1710 GMT quake, with notification that a small tsunami would reach the northeastern Japanese coast.

A yellow warning is issued when a tsunami is not expected to exceed a height of 1 metre (3 ft), far smaller than the wave that hit the Fukushima plant in early 2011 and devastated large swathes of Japan’s eastern seaboard.

1 Majority of Irish Covid-19 cases come from variant that originated in Spain – study
2 Postmortem results on mother and two children found dead in Dublin due on Friday
3 Cork shootings: Father and sons to be buried in two separate funerals
4 The real Contagion virus is out there and it’s causing virologists to worry
5 Sinn Féin senator and two party officials resign following Covid-19 grants controversy
Real news has value SUBSCRIBE