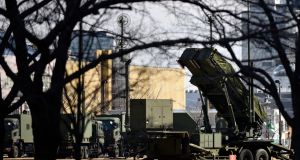 News of North Korean plans to launch a satellite and rocket have been met with concern by regional neighbours Japan, South Korea and even ally China.

Japan placed its military on alert on Wednesday to shoot down a rocket if it threatens its space, while South Korea warned the North will pay a “severe price” if it proceeds with a satellite launch that Seoul considers a missile test.

China’s foreign ministry said the country was extremely concerned by reports that North Korea plans to launch a satellite.

North Korea should immediately call off the planned launch, which is a violation of UN Security Council resolutions, the South Korea’s presidential office, the Blue House, said in a statement.

The warnings come after the North notified UN agencies on Tuesday of its plan to launch what it called an “earth observation satellite” later this month.

“North Korea’s notice of the plan to launch a long-range missile, coming at a time when there is a discussion for Security Council sanctions on its fourth nuclear test, is a direct challenge to the international community,” the Blue House said. “We strongly warn that the North will pay a severe price ... if it goes ahead with the long-range missile launch plan.”

Japanese prime minister Shinzo Abe said he would work with the United States and others to “strongly demand” that North Korea refrain from what he described as a planned missile launch.

Japan’s defence minister Gen Nakatani ordered ballistic missile defense units including Aegis destroyers in the Sea of Japan and Patriot missile batteries onshore to be ready to shoot down any North Korean rocket that threatened Japan.

The rocket is likely to fly over Japan’s southern island of Okinawa in the Pacific Ocean at an altitude of several hundred kilometres.

Reports of the planned launch drew fresh US calls for tougher UN sanctions that are already under discussion in response to North Korea’s recent nuclear test.

Pyongyang has said it has a sovereign right to pursue a space programme by launching rockets, although the United States and other governments worry that such launches are missile tests in disguise.

A spokeswoman for the International Maritime Organisation, a UN agency, said the agency had been told by North Korea it planned to launch the ‘Kwangmyongsong’ satellite.

The International Telecommunication Union, another UN agency, also said North Korea had informed it on Tuesday of plans to launch a satellite with a functional duration of four years in a non-geostationary orbit.

North Korea said the launch would be conducted in the morning one day during the announced period of February 8th to 25th, and notified the coordinates for the locations where the rocket boosters and the cover for the payload would drop.

Those locations are expected to be in the Yellow Sea off the Korean peninsula west coast and in the Pacific Ocean to the east of the Philippines, Pyongyang said.

North Korea also said last month it had successfully tested a hydrogen bomb but this was met with scepticism by US and South Korean officials and nuclear experts. They said the blast was too small for it to have been a full-fledged hydrogen bomb.