Mother of baby trapped in sewer pipe was present at rescue

Police launch investigation into case as baby recovers in hospital 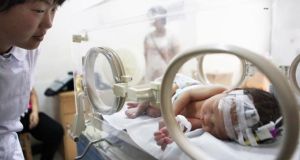 A nurse looks the baby as he rests in an incubator after he was rescued from a sewage pipe at a hospital in Jinhua, Zhejiang province. Photograph: China Daily/Reuters 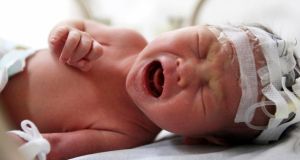 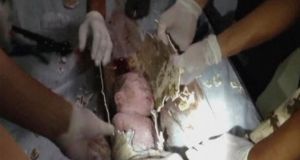 The mother of the Chinese newborn baby trapped in a pipe in a squat toilet was the person who raised the initial alarm and witnessed the two-hour rescue, but only admitted later that the child was hers.

Firefighters were summoned on Saturday to the apartment block in the Pujiang area of the eastern Zhejiang province city of Jinhua to rescue the baby in one of the public squat toilets in the apartment building.

Dramatic footage was shown of doctors using pliars to cut away the L-joint of a sewage pipe, which was about 10 centimetres in diameter, to rescue the child.

The baby weighed 2.8 kilograms and its heart rate was low, but other than minor cuts and bruises, he was not injured by his ordeal. Its placenta was still attached.

The 22-year-old mother, whose identity is being kept secret, gave birth to the child on Saturday, having kept her pregnancy secret for months as she did not think her parents would support her.

After giving birth in one of the public squat toilets in the apartment block, the baby slipped in to the toilet pipe.

She cleaned up the mess, and told the landlord that there was a baby crying in the toilet. She watched as the firefighters managed to get the baby out during a two-hour rescue operation, but didn’t say own up to being the mother because she was worried she could not afford to raise the child, she said.

The mother did express concern about the child’s welfare, but this did not raise suspicions. She confessed to police a couple of days later when they asked her to undergo a medical checkup after searching the room she rented in the apartment building, and found toys and blood-stained toilet paper, according to a report on the state-run Zhejiang News website.

Police initially said they were treating the case of as possible attempted homicide, but it was not immediately clear whether the mother would face criminal charges.

A number of visitors have come to the Pujiang People’s Hospital with contributions of nappies, baby clothes and powdered milk.