Department says those on rescue missions are not in danger, not due full allowance 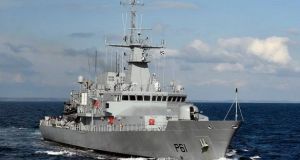 Naval Service members rescuing migrants from the Mediterranean are not entitled to full overseas service payments because they are not in danger, the Department of Defence has said.

PDforra, the association representing soldiers, sailors and aircrew, is urging Minister for Defence Simon Coveney to pay those on the international rescue mission in the Mediterranean the same daily allowances as soldiers deployed in world trouble spots.

Members of the Army serving in missions in Lebanon and the Golan Heights between Israel and Syria are entitled to €80 per day tax free as well as their usual salaries.

However, those sailors working in the Mediterranean have been offered €50 per day, tax free.

PDforra says the ships the Naval Service personnel are working on are fully armed and that sailors have had to produce their firearms when pulling up alongside some boats packed with migrants.

Because of that, it believes the personnel are entitled to the full daily payments, which would be worth between €1,500 and €2,000 tax free over a tour of duty.

PDforra general secretary Gerry Rooney described the argument for the sailors’ allowance as “an open and shut case”.

“The humanitarian relief-and-rescue operation is conducted from Naval Service warships which must be ready to defend themselves and those they have rescued at any time during mission,” he said.

Mr Rooney was speaking at the opening session of PDforra’s annual conference in Galway.

“They must be paid an allowance for this work and we now stress to the Minister that he has a responsibility in ensuring a positive outcome,” he said.

“It was the Minister and his Government who committed the Naval Service to this mission - and surely this was done with the knowledge that an allowance would be due to those who volunteered their services.”

However, the Department in a statement said the mission in the Mediterranean was an “unarmed” and “humanitarian” deployment, meaning the sailors were not entitled to the same daily payments as their Army colleagues on overseas missions.

“Members of the Naval Service engaged in the Maritime Humanitarian Search and Rescue Operation in the Mediterranean are being paid the rate for ‘unarmed peace support allowance’,” the Department said.

“This is the same allowance as has been paid in the past to Army personnel deployed on humanitarian operations such as in Sierra Leone (and) Haiti.

It added the Naval Service operation was “not an armed mission in the sense of armed missions” in UNIFIL Lebanon, UNDOF Golan Heights and Chad.

“There is no armed threat to the personnel involved in the Naval operation. As such, there is no basis for the payment of the additional Armed Peace Support Allowance.”