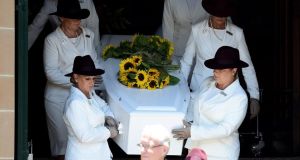 The casket of Tori Johnson is removed from his memorial service, in Sydney, Australia on Tuesday. Photograph: EPA

Memorial services for the two victims of an Australian cafe siege were held on Tuesday.

Lindt Chocolat Cafe manager Tori Johnson and lawyer Katrina Dawson were killed a week ago at the end of a 16-hour siege by gunman Man Haron Monis when police stormed the cafe in the city’s central business district. Monis also died.

An official investigation into the final moments of the siege and the deaths of all three is underway. The cafe in Martin Place, a pedestrian avenue, is boarded up.

Several of the other 17 hostages attended the funeral service for 34-year-old Johnson at a church just metres away from the cafe. New South Wales state Premier Mike Baird and Police Commissioner Andrew Scipione also joined mourners, who included Johnson’s partner of 14 years.

A quote from philosopher Rumi under a photo of Johnson graced the cover of the funeral booklet: “Outside the ideas of wrong-doing and right-doing, there is a field. I will meet you there.”

More than 1,000 people attended a separate memorial service for 38-year-old Dawson at her alma mater, Sydney University. Her three children, aged four, six and eight, each chose a song for the service: Santa Claus is Coming to Town, Somewhere over the Rainbow, and The Gambler respectively.

The huge carpet of thousands of bouquets of flowers in Martin Place was removed early on Tuesday as thunderstorms threatened to drench the city. The flowers will be crushed into mulch and scattered at a site to be determined.

Bright red and yellow bouquets from Johnson’s service were placed at a smaller tribute site under a marquee in Martin Place.