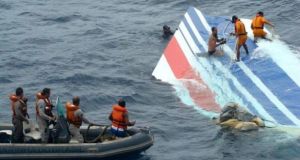 Debris from the downed Air France jet is recovered in 2009.

A leading aviation safety expert has said it is “extraordinary” that the pilots of a missing Malaysia Airlines plane carrying 239 people did not make a distress call.

The Boeing B777-200 aircraft would have been cruising at about 35,000 feet when it lost contact over the South China Sea, giving the pilots “plenty of time” to report any technical problems, Flight Global’s operations and safety editor David Learmount said.

The plane disappeared from radar at 1.30am local time (5.30pm GMT on Friday) on a flight from Kuala Lumpur to Beijing, and international aviation authorities have still not located the jet several hours later.

Mr Learmount said: “Something happened and the pilots did not tell anyone. Why? It’s a good question.

“It’s extraordinary the pilots failed to call because they had plenty of time to. Unless there was a bomb on board but there has been no evidence of that.”

Search and rescue crews across south east Asia have been scrambled to find the plane, which was was carrying 227 passengers, including two infants, and 12 crew members.

Passengers were from 14 countries, including 152 from China, 38 from Malaysia, six Australians and four Americans. It is believed no Irish or British nationals were on board.

Mr Learmount, who is a pilot, drew comparisons with the Air France 447 plane crash over the Atlantic Ocean in 2009, which killed 216 passengers and 12 aircrew, including three Irish women.

The body of one of the Irish victims, Jane Deasy, a 27-year-old doctor from Rathgar in Dublin, was recovered during the original search operation. Dr Aisling Butler (26) of Roscrea, Co Tipperary, and Dr Eithne Walls (28) from Ballygowan, Co Down, also died in that crash.

The aircraft crashed when pilots lost control after ice crystals affected sensors used to measure the plane’s speed, he said.

Mr Learmount said: “This is an historical comparison and could be a coincidence.

“It also happened in the early hours of morning, after midnight in the dead of night, and went missing without a call from the pilots.

“If the engines were to fail because of some kind of interruption to the fuel flow, they can glide with no problems whatsoever for about 40 minutes at that height.”

Mr Learmount said the time which the Malaysia Airlines plane went missing may be significant.

He said: “Between midnight and 2am you’re not at a mental or physical performance high - you’re at the lowest performance standard in the 24-hour cycle.”

The failure to locate the plane so far was not unusual, he added, with investigators taking two years to find the missing Air France 447 plane.

However, Mr Learmount admitted he was “puzzled” why authorities had not divulged a more accurate location of where the aircraft went missing.

“They may not know precisely but they know pretty accurately,” he said.

The 53-year-old Malaysia Airlines pilot, Zaharie Ahmad Shah, has more than 18,000 flying hours and has been flying for the airline since 1981, the company’s chief executive Ahmad Jauhari Yahya said.

The first officer, 27-year-old Fariq Hamid, has about 2,800 hours of experience and has flown for the airline since 2007.