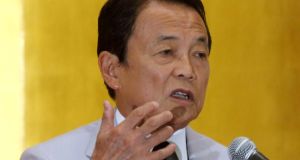 Finance Minister Taro Aso said Japan should use the actions of that regime as a model for reforming its constitution. Photographer: Tomohiro Ohsumi/Bloomberg

Taro Aso backtracked from remarks saying Japan should use the actions of the Nazi regime in Germany as a model for reforming its constitution, after facing criticism from across Asia.

“I think it is vitally important to discuss constitutional revision calmly,” he said today in an e-mailed statement.

“To emphasise this, I mentioned the Nazi regime’s revision of the Weimar constitution as a negative example.”

Mr Aso also said he wished to “withdraw the comment raising the example of the Nazi regime”.

He was quoted by the Tokyo Shimbun newspaper as telling a seminar on July 29th that Prime Minister Shinzo Abe’s government should make its constitutional change, following the example of the Weimar Republic’s reform that allowed Adolf Hitler to consolidate power.

Japan’s past occupation of neighbouring countries still taints regional relationships 68 years after the end of the World War II, and Mr Abe’s talk of a military build-up has strained ties with neighbors like China.

Mr Abe also said today that he was “totally negative on what happened with the Nazis and the Weimar constitution,” and that it was “unfortunate” the comments “created a misunderstanding that differs from my thinking”.