It’s not entirely clear who is driving the violence, and for what cause 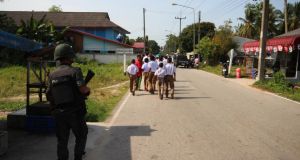 An armed police escort for Muslim school children in the village of Tak Bai, location of one of the conflict’s worst massacres. Photograph: Tom Farrell

The banner at the junction in the village of Tak Bai is scripted in both Thai and Arabic. Above a gaggle of smiling schoolchildren, some clutching Thai flags, the locals are urged to “support the dialogue”.

Tak Bai is about three kilometres from the border with Malaysia and feels remote from the Thai capital of Bangkok. In October 2004, the village witnessed one of the most notorious incidents of a decades old insurgency in the country’s predominantly Muslim deep south.

In late March, the Thai government held the first openly acknowledged peace talks with the largest rebel group, known as the Barisan Revolusi Nasional (National Revolutionary Front) in an effort to defuse a conflict that has killed 5,600 people over the past nine years.

But the widow known as Tak Bai’s “Iron Woman” is sceptical that the talks, brokered by Malaysia, will bring long term peace. “They [the BRN delegates] are not the real players,” says Yaena Salame (53), whose home is just around the corner from the banner.

“If there was no BRN there, Malaysia would lose face. I think that’s why the violence is going on even after the rounds of negotiation.”

It is unsurprising that Ms Salame, who visited Dublin in February 2010 as a guest of the Frontline Defenders human rights NGO, should sound a pessimistic note. The insurgency, supposedly committed to carving away a southern Muslim state, is a mysterious entity.

Most of the violence is concentrated in Thailand’s four southernmost provinces of Pattani, Yala, Songkhla and Narathiwat. This area, home to about 1.8 million people, roughly encompasses what was once the Sultanate of Pattani, ceded to the King of Siam by the British in 1909.

Like other separatist groups, collectively known as juwae (warriors) the BRN, at least until recently, seldom issued public statements. Moreover, terrorism experts say efforts to co-opt Pattani’s guerillas into a wider southeast Asian jihad have proved fruitless. Emissaries of Islamist groups such as Jema’ah Islamiyah, masterminds of the October 2002 nightclub blasts in Bali, were rebuffed. This is fortunate for the Thai economy: 22 million tourists visited last year and Pattani is just eight hours’ drive from the major resort of Phuket.

Chickens scratch in the dirt outside Ms Salame’s home as she fetches a framed picture of her husband Mayusof, shot dead in 2008. “I know the identity of the killer but that person has already been killed,” she says.

“The assassin worked as a voluntary security official but he was not originally from here. He was shot but I don’t know by whom. I suspect it was the security forces because I worked so much on human rights and I publicised what happened at Tak Bai.”

Suffocated
In October 2004, six local men were arrested for supplying arms to the insurgents. When demonstrators demanded their release, the Thai military attacked with tear gas and water cannons. Seven protesters were killed and up to 1,300, mostly young men, arrested.

The men, including Ms Salame’s 21-year-old son, were ordered to strip to the waist and lie on the ground. They were then bundled into trucks in layers of bodies, five or six deep, and driven to an army camp. En route 78 died of suffocation.

“[My son] was lucky because he lay on top. He was released on bail days later.”

The Tak Bai incident came towards the end of a year in which a seemingly moribund rebellion suddenly reignited in southern Thailand.

In early 2004, gunmen raided a Thai army depot, killing the guards and making off with about 400 assault rifles. Three months later, the juwae launched co-ordinated attacks on 11 police posts in the region. These left 107 dead, including 32 gunmen who retreated to the 16th century Krue Se Mosque. After a seven-hour standoff, the army stormed the building.

“No-one could get into the restricted area but I could see the helicopters hover low over the mosque. I heard the gunfire,” recalls Mohammed Haji Ninjos (50), a businessman who lives nearby.

Bomb blast
The Krue Se Mosque is located on the shoulder of Highway 42 on the approach to Pattani town, home to 45,000 people.

Nearly a decade on, it is still not immune to violence. Mr Ninjos points to a shattered stone pedestal about 20 metres from the mosque steps. Until last month a historic cannon was mounted there. Then, just after evening prayers, a bomb blast demolished the exhibit. No one was injured, but the perpetrators’ identity and motivation remains unknown.

Mr Ninjos says the conflict has driven a wedge between Malay speaking Muslims and Thai Buddhists.

“Buddhists and Muslims used to be close friends for a long time but it’s different now,” he says. “They are scared of the third party attacking them.”

The attacks generally involve drive-by shootings or the detonation of car bombs. Armoured personnel carriers and jeeps full of armed police are a common sight on the rural highways. In Pattani town, soldiers maintain a vigil at the markets and near government buildings. The identity of the “third party” is uncertain.

Thailand has deployed 23,000 soldiers in the south, in addition to 18,000 police. There are also several thousand “voluntary” militias, village defence committees whose members are given guns and just three days of training.

“The school children probably think the carrying of weapons is a normal thing,” says Romuelah Saeyeh, a youth worker whose husband Anwar was sentenced to 12 years imprisonment in 2005, accused of BRN membership.

‘Liberated’ territory
The insurgency is sometimes explained as the result of poverty and alienation from Bangkok. However, some areas of Thailand experience worse living conditions and living standards have actually improved in the region in recent years.

The juwae do not control tracts of “liberated” territory in the countryside even though the verdant expanse of mountains and tropical forest provides classic guerilla terrain.

Just off a country road in Narathiwat province, Arbokaree Kajeh, a bearded 32 year old with a vicious scar on one thigh, the remnant of a bullet wound, now works as a barber. He says he joined the BRN in 2006 because local men convinced him of the rightness of the cause.

“I didn’t go for a couple of weeks into the jungle,” says Kajeh, who surrendered to the military over a year ago and was amnestied. “I would just stand by in my home and if someone needed me or if the leaders had a plan to run an operation somewhere, they would call me and I would go.”

He says “there are several groups that are present in the area” but “the BRN is the most important.”

With a wife and young family to support, he says . his days as a juwae are over. Although talk of an autonomy deal for the region is fiercely resisted by the Thai military and unlikely to come out of the talks, he thinks this “might be a good thing”.