Prime Minister Theresa May says she has discussed Britain leaving the European Union with U.S. President Barack Obama, and will consult on how to make sure the two countries have the closest possible trading relationship. 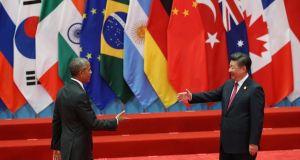 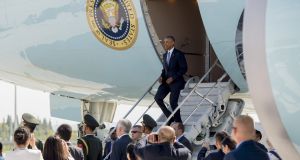 President Xi Jinping welcomed world leaders for the G20 meeting in Hangzhou, but a frigid welcome for US president Barack Obama highlighted the global tensions which form the backdrop to the summit.

In earlier remarks, Mr Xi focused on the economy rather than the thornier issues such as China’s territorial ambitions in the South China Sea, growing trade tensions and human rights.

The Chinese leader quickly latched on to ally Russia’s Vladimir Putin as the leaders walked through the vast G20 venue. He also spoke with German chancellor Angela Merkel early on, and as the leaders took their seats, swapped pleasantries with Francois Hollande.

Mr Obama was given a less than warm welcome as he stepped off Air Force One in Hangzhou after he urged the Beijing government to abide by an international court’s decision denying China’s territorial claims in the South China Sea.

Britain’s Theresa May also spoke briefly with Mr Xi as the meeting got underway. Brexit is expected to be one of the subjects for discussion. This is most likely Mr Obama’s last Asian trip as POTUS, and the backdrop to his meeting with Mr Xi was upbeat after the leaders of the world’s two biggest economies pledged to ratify the Paris climate change accord, which aims to drastically cut carbon emissions.

‘The ass of Air Force One’

However, a series of protocol breaches on the tarmac as Mr Obama arrived at Hangzhou airport for the summit of the world’s 20 major economies underlined just how strained relations have become between the two superpowers.

“This is our country! This is our airport!” a Chinese official shouted after US handlers expressed anger at the absence of a suitable stairway off the government plane, forcing Mr Obama to leave the plane from “the ass of Air Force One” as one American journalist tweeted.

The greeting was in sharp contrast to the welcome given to India’s Narenda Modi, who had a neon-lit red carpet on the stairway down from his plane.

Mr Xi and Mr Obama subsequently held a four-hour meeting, after which the US leader urged Beijing to uphold its legal obligations from a judgment from The Hague on the South China Sea, and stressed the United States’ commitments to its regional allies.

Mr Xi issued a forthright statement after the talks saying China would “continue to firmly safeguard its sovereignty and maritime rights in the South China Sea.

“At the same time, it will persist in peacefully resolving disputes through consultations with parties directly involved,” Xi said, his remarks published on the foreign ministry’s website, urging the United States to “play a constructive role” in the peace and stability of the region.

In its owns statement, the White House said: “The president reaffirmed that the United States will work with all countries in the region to uphold the principles of international law, unimpeded lawful commerce, and freedom of navigation and over-flight.”

During Mr Obama meeting with Mr Xi and he took the opportunity to raise some of other sticking points during their talks, emphasising the need for “an open trade and investment environment” and “the need for China to protect religious freedom for all of its citizens”.

During their talks, Mr Xi told Mr Obama that China objects to the deployment of the THAAD missile shield in South Korea to help protect against the North Korean nuclear threat.