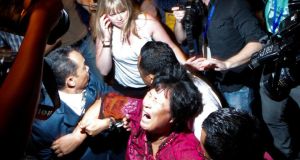 A Chinese family member of a passenger on board the missing Malaysia Airlines flight screams as she is being dragged from the media conference area at a Kuala Lumpur hotel yesterday. photograph: Edgar Su/Reuters

Authorities in Sepang said yesterday that they were trying to recover data deleted from a flight simulator custom-built by the pilot of the missing Malaysia Airlines jet, whose actions, along with those of his first officer, have fallen under growing scrutiny.

At a news briefing yesterday that began after Chinese protesters representing relatives of passengers on the lost flight burst in and demanded information from the Malaysian government, officials said that investigators had recruited “local and international expertise” to examine the flight simulator taken from the home of the captain, Zaharie Ahmad Shah. They discovered that its data records had been cleared on February 3rd, more than a month before the March 8th flight that vanished with 239 people on board after veering off its scheduled route from Kuala Lumpur to Beijing.

“The experts are looking at what are the logs, what has been cleared,” said Tan Sri Khalid Bin Abu Bakar, inspector general of the police, who declined to comment further. Flight simulators, computer programs often used in pilot training, can often replicate specific airports and flight paths.

The Malaysian defence minister, Hishammuddin Hussein, said authorities had received background checks from the countries of all the passengers on the plane except Ukraine and Russia. “So far, no information of significance on any passengers has been found,” he said.

Because of evidence suggesting that whoever diverted the missing Boeing 777-200 knew how to disable the plane’s communications systems and make course changes, investigators have been closely examining Mr Zaharie (53), a veteran pilot with more than two decades of experience, and his co-pilot, Fariq Abdul Hamid (27). But Mr Hishammuddin cautioned that “the passengers, the pilots and the crew remain innocent until proven otherwise”.

“For the sake of their families, I ask that we refrain from any unnecessary speculation that might make an already difficult time even harder,” he said. Earlier yesterday, Australian organisers of one part of the vast search for the missing jet said they had reduced their search area in the southern Indian Ocean by half.


Revised area of focus
The revised area of focus in the Australian-led part of the search covers 89,000 square nautical miles, roughly 1,200 nautical miles southwest of the Australian city of Perth, Mr Young said. He said the airborne searchers had found no traces of debris that could be from the jet. The searchers’ view of the water was good and they were able to spot marine life, “so we know we can make sightings, but there were no results relevant to the search,” Mr Young said.

Like other officials involved in the multinational search, Mr Young stressed the difficulty of finding the plane, let alone possible survivors, more than a week and a half after the jet disappeared. “We still have grave fears for the safety of anyone that may have managed to escape the aircraft in the southern ocean. It remains a big area,” Mr Young said. “There is a lot of work to be done yet.”

The frustrations felt by family members and friends of the missing passengers, who have waited 11 days for some indication of what happened, erupted before the briefing in a hotel conference room in Sepang.

As reporters waited for the briefing to begin, several protesters who said they represented families of the passengers unfurled a banner that read, “We oppose the Malaysian government concealing the truth. Delaying time for saving lives.”

After a struggle, the police eventually removed the banner and forced the protesters from the room.

About two-thirds of the missing passengers are Chinese citizens, and some of their family members have come to Malaysia hoping for news about the plane. The protesters said that until now they had been prevented from telling the press of their mounting frustration with the Malaysian government’s erratic response.

“We are getting some reasonable coverage of the area,” he said. “We have also had three ships in the area.” But searchers are confronted with sobering limits on their reach across the seas. The plane’s whereabouts remain little more than a matter of educated guesswork, based on satellite signals and other data gleaned by analysts. “A needle in a haystack remains a good analogy,” Mr Young said on Tuesday.

A satellite over the Indian Ocean received a final transmission from an automatic data system on Flight 370 hours after the last radio or radar contact, leading investigators to deduce that the plane had sent it from somewhere along one of two long, arcing corridors that together encompass 2.24 million square nautical miles, Mr Hishammuddin said on Tuesday. That is an area the size of the continental United States, excluding California.


Abrupt turn
The jet, which had been headed to Beijing, abruptly turned back over the Gulf of Thailand early on March 8th. Around that time, its communication links were severed, and it cut across Malaysia and out over the Strait of Malacca.

The plane’s final blips to a satellite indicate it headed west toward the Indian Ocean and then turned to take one of two possible corridors, either north or south.

American officials have said that the sharp turn to the west was achieved using a computer system on the plane, and that the turn was most likely programmed into it by someone in the cockpit who was knowledgeable about airplane systems. – ( New York Times service)