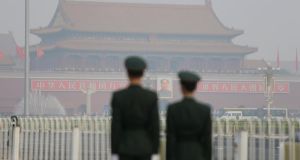 Chinese police have caught five suspects after a vehicle burst into flames on Beijing’s Tiananmen Square in what police called a terrorist attack in which five people were killed.

The SUV involved in Monday’s incident was driven by Usmen Hasan, a man whose name suggested he is an ethnic Uighur, who are Muslims from the far western region of Xinjiang, police said.

His wife and mother were also with him in the car, along with devices filled with gasoline, knives and a flag with “religious extremist content” written on it, police said on their official microblog on Wednesday.

Five people connected with the incident had been caught in connection with help from the Xinjiang government, the police added, all of whom also have names that suggest they are Uighur.

Police have seized jihadist flags and knives from where they were staying, police added.

Two tourists were also killed in Monday’s incident and at least 38 people were injured.

Xinjiang is home to the Turkic-speaking Uighurs, many of whom chaff at China’s controls on their religion and culture and there have been violent clashes there in the past.

The government blames Uighur militants for provoking violence in Xinjiang, which borders the Central Asian states of the former Soviet Union as well as Afghanistan and Pakistan.

But many rights groups and exiles say China exaggerates the threat to justify its harsh rule.