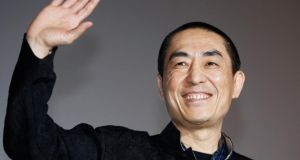 Chinese film director Zhang Yimou has admitted that he defied the country’s one-child policy by having three children with his wife. Photograph: Jo Yong-Hak/Reuters

Chinese film director Zhang Yimou has admitted that he defied the country’s one-child policy by having three children with his wife, but denied reports that he had sired seven children with different women.

Media reports that Mr Zhang (62) has fathered seven children with four women circulated widely in May. This triggered an investigation by the health and family planning commission of Wuxi, in the eastern province of Jiangsu.

Mr Zhang’s office yesterday issued an open letter on the Twitter-style Sina Weibo site saying he and his wife, Chen Ting, have two sons and a daughter, in breach of family planning rules which limit couples to having one child.

The officials sent a team to Beijing looking for Mr Zhang, but failed to locate the House of Flying Daggers director, prompting online speculation that they are going easy on him because of his reputation.

“He sincerely apologises to the public for the harmful social effect it caused,” the statement said. “He would like to accept the investigation of the Wuxi family planning bureau and will fully co-operate with government departments, and accept the punishment according to the national regulations.”

Officials from the family planning office confirmed that the couple had sent representatives to the office to accept an investigation and that it was under way.

Mr Zhang said in the past two years his family had been followed and photographed and he asked that his privacy be respected.

“They even fabricate and spread fake information, saying I have three or four women and seven or eight children, or many illegitimate children, or have given a 10 million yuan [€1.21 million] bonus for each child,” said Mr Zhang.

This is the first time the director has responded to reports about his family, including speculation that he could face a fine, or “social compensation fee” of up to 160 million yuan (€19.32 million).

The one-child policy limits most urban couples to one child and allows two children for rural families if their firstborn is a girl. The government introduced the policy in 1979 as a temporary measure to curb a surging population, but it is still in place, and is widely despised.

The government introduced changes last month, giving the green light to couples wanting to have two children if one of them is an only child, the first substantial easing of the policy in nearly three decades.

In the course of his career, Mr Zhang has gone from being a banned director for his arthouse fare to a maker of sweeping, visually striking dramas.

His popularity rose after his choreography for the 2008 Olympics opening spectacle.

1 Harry and Meghan will no longer be working members of British royal family
2 Mary Lou has to call for the smelling salts as SF councillor deals a knock-out blow
3 Dublin gangland figures involved in Drogheda feud that killed 17-year-old
4 Who was murdered teenager Keane Mulready-Woods?
5 Varadkar says Ireland a safe country despite recent violence
Real news has value SUBSCRIBE