Some 347 of the fugitives returned were corrupt cadres, says Communist Party 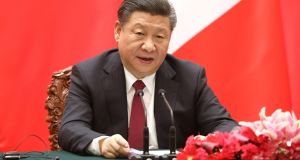 One of the signature policies of President Xi Jinping’s five-year rule in China has been a crackdown on corruption among government officials and party cadres. Photograph: Ludovic Marin/AFP/Getty Images

China’s crackdown on corruption has seen 1,300 fugitives suspected of economic crimes, 347 of them corrupt officials, returned to China from abroad in the past year, the discipline arm of the ruling Communist Party said.

About 980 million yuan (€125 million) of illicit assets were recovered, according to the China Central Commission for Discipline Inspection.

Tighter control of the party and the government has also seen a smaller number of fugitives leaving every year, down from 101 in 2014 to four last year. In 2015 there were 31 and 19 in 2016, the China Daily reported.

One of the signature policies of President Xi Jinping’s five-year rule in China has been a crackdown on corruption among government officials and party cadres. More than 1.3 million Communist Party cadres, including “tigers” at senior level and more junior “flies”, have been punished.

The biggest names to fall include the former Chongqing party boss Bo Xilai, once seen as a potential leadership candidate, and the former top security czar Zhou Yongkang.

The anti-corruption campaign has proven popular among the Chinese middle class.

Bringing fugitives back from overseas, especially government officials who have stolen public funds, has been a major goal of the Chinese government in recent years, but it has been hampered to some extent by a lack of extradition treaties with key countries, especially with the US, Canada and Australia.

Since 2014, there has been a central office responsible for co-ordinating and directing the hunt for fugitives, which has also operated a dragnet known as the SkyNet to capture runaway corrupt officials overseas.

The CDDI held a plenary session at the weekend and it said that this year it would step up its international co-operation to fight corruption by signing more bilateral agreements and joint investigations.

“Under the leadership of the Communist Party of China central committee, we’ll broaden judicial co-operation with relevant countries so that there will be no ‘safe haven’ for corrupt fugitives,” said La Yifan, director of the CCDI’s international co-operation department.

In 2015, Interpol issued “red notices” to arrest China’s 100 most-wanted corrupt fugitives, and since then more than half of them have been returned to China, including the top target Yang Xiuzhu, who was brought back to China in 2016 after 13 years on the run in the US.

Mr Yang was formerly deputy mayor of Wenzhou in eastern China. He was jailed for eight years for embezzling 19 million yuan (€2.4 million) in public funds and taking bribes of 7.35 million yuan (€930,000).