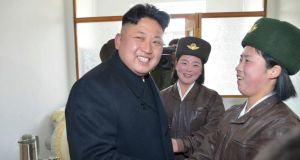 
The Chinese government has told North Korea of its “deep concern” after an aircraft from China Southern Airlines crossed the trajectory of a North Korean missile launched by Pyongyang this week.

The aircraft was flying from Tokyo’s Narita airport to the northeastern Chinese city of Shenyang on Tuesday, the foreign ministry said. While it passed over the trajectory some minutes after the missile, the incident was a reminder of the fraught nature of international relations around the Korean peninsula.

“On this issue, we have already contacted the North Korean side to convey our deep concern,” Chinese foreign ministry spokesman Qin Gang told a daily news briefing.


Call for restraint
“If any country is to hold training or exercises, it should take measures in accordance with international practice to ensure the safety of civil [facilities] in relevant airspace and maritime space,” Mr Qin said, calling on all parties to exercise restraint.

North Korea is low on friends and China is the isolated state’s most significant diplomatic and economic supporter, though Beijing’s patience with the country to which it once said it “was as close as lips and teeth” has been severely tested following three nuclear tests and various missile launches against China’s will.


Yes or no
Meanwhile, one of the world’s least hotly contested elections is due to take place tomorrow when North Korean voters go to the polls to elect a new parliament. In each electoral district there is one candidate, picked by the government, and people can vote “yes” or “no”. Pretty much everyone says “yes”. Turnout is generally about 99 per cent.

The country’s young leader, Kim Jong-un is standing in District 111 on the sacred Mount Paekdu, where his grandfather Kim Il-sung organised resistance against the Japanese and where his father Kim Jong-il was born, so the legend goes, although there are reports he was born in the Soviet Union.

The elections allow observers to see what figures are in favour in Pyongyang, and anyone who doesn’t go faces being hounded by neighbourhood election monitors and other North Koreans.

The polls cannot be called a test of Mr Kim’s personality, as they will undoubtedly underscore his popularity, but they come three months after he had his uncle, Jang Song-thaek, executed.