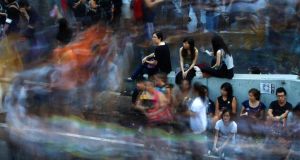 Protesters block the main street to the financial Central district outside of the government headquarters building in Hong Kong, today. Thousands of pro-democracy protesters thronged the streets of Hong Kong, ratcheting up pressure on the pro-Beijing government that has called the action illegal, with both sides marking uneasy National Day celebrations. Photograph: Carlos Barria/Reuters

A carnival atmosphere prevailed as thousands of pro-democracy protesters, wearing yellow ribbons, gathered on the streets of downtown Hong Kong for a fifth day of their campaign pushing for universal suffrage for the territory.

Riot police used tear gas and pepper spray against the demonstrators at the weekend, but on the fifth day of the campaign there was no repeat of those tense standoffs, and it appears that both sides are waiting to see what the next stage will be.

There had been fears that police would make a show of force before the start of celebrations marking the anniversary of the Communist Party’s foundation of the People’s Republic of China in 1949.

A flag-raising ceremony in the early morning at the waterfront to mark National Day passed without incident, after student leaders appealed for protesters not to disturb the ceremony, fearful of angering the authorities in Beijing.

Demonstrators lined up in silence at Bauhinia Square to watch the ceremony and created a human chain, but the actions were peaceful.

The protesters are opposed to China’s restrictive plan to only allow Beijing-vetted candidates to run in Hong Kong’s 2017 elections for chief executive, and the demonstrations mark the most significant challenge to the Chinese government since it cracked down on pro-democracy protests in Tiananmen Square in 1989.

Under the “one country, two systems” deal between China and Britain ahead of the handover in 1997, Hong Kong has much more autonomy and freedom that across the border in mainland China, with universal suffrage the ultimate goal.

The demonstrators were up early, setting up barricades in Central, although the police presence is much less visible than at the weekend. Protesters are calling for Hong Kong Chief Executive Leung Chun-ying to step down. Mr Leung faces a challenge in trying to balance the situation. A serious crackdown could damage confidence in Hong Kong as a financial centre, but a weak response could encourage democracy activists in mainland China, and anger Beijing.

He said that Hong Kong police would be able to maintain security without help from People’s Liberation Army (PLA) troops from the mainland.

Beijing has declared the protests illegal and made its opposition clear.

“In today’s China, engaging in an election system of one-man-one-vote is bound to quickly lead to turmoil, unrest and even a situation of civil war,” the deputy director of China’s National People’s Congress Internal and Judicial Affairs Committee, Li Shenming, wrote in the People’s Daily, the Communist Party’s mouthpiece. The Beijing leadership has been censoring news and social media comments about the Hong Kong demonstrations.