Barack Obama in Hiroshima: long on words, short on action

Analysis: US neglecting to say sorry may let Japan off hook for China and N Korea 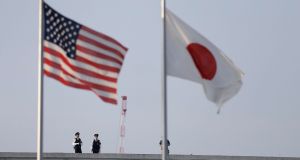 Japanese policemen on top of the Hiroshima Peace Memorial Museum behind the US and Japanese flags: Barack Obama visited Hiroshima and made a plea for nonproliferation of nuclear weapons. Photograph: Kiyoshi Ota

The wheels of political atonement turn slowly. In 1997, Tony Blair became the first British prime minister to say sorry for the Famine. It took 150 years.

Fourteen years later Queen Elizabeth lamented the “heartache, turbulence and loss” experienced by the two islands, the nearest thing to an apology ever offered by the royal family.

In history’s gallery of mea culpas, perhaps the most famous image of all is West German chancellor Willie Brandt spontaneously dropping to his knees in front of a memorial to Jewish victims in Warsaw in 1970.

President Barack Obama’s visit to Hiroshima did not live up to that – how could it? For a start, he made it clear he would not “revisit the decision” to use nuclear weapons on Hiroshima and Nagasaki in 1945. And there was to be no apology for the mass killing of over 200,000 people.

Instead, there was a plea for nonproliferation and a universal message of peace. “We must have the courage to escape logic of fear,” he said. “We are not bound . . . to repeat the mistakes of the past . . . We can learn. We can choose.”

There are 180,000 surviving stories from the obliteration of Hiroshima and Nagasaki, each one unique and awful. More than 15,000 toddlers and children died in Hiroshima.

There’s Hirotami Yamada who, as a 14 year old, lost his entire family, burning his older sister Misao on a makeshift pyre and burying her ashes in an empty can of baby-milk powder.

And if Obama said sorry for America, would he not also have to apologise for napalming Tokyo four months earlier, killing 100,000 in a single night, many of them children? Or the carpet bombing of 66 other Japanese cities, leaving hundreds of thousands more dead or missing?

If apologies are demanded, what about Japanese prime minister Shinzo Abe, standing by Obama’s side, a revisionist politician who has built his career partly by muddying the record of what Japan did during the war; whose supporters believe the only thing they did wrong was to lose. “The best effect of President Obama’s visit to Hiroshima is how Japan will not have to apologise to China and South Korea again,” tweeted former Osaka city mayor Toru Hashimoto before the visit. “America will show that there is no need to apologise for the past war.”

There too, there is disappointment. Despite Obama’s landmark Prague pledge in 2009, America, wrote the Alliance for Nuclear Accountability recently, “is currently at the helm of the largest expansion of funding on nuclear weapons since the fall of the Soviet Union”, a $1 trillion splurge that put the world on track for a 21st century arms race.

George W Bush halved the nation’s arsenal, according to the Federation of American Scientists. His father, George H, cut 41 per cent. Together they removed 14,801 warheads from America’s stockpile. Obama’s reduction tally has been 500 warheads.

Without US leadership, A-bomb survivors know that the club of nuclear powers – the US, Russia, China, France, Britain, India, Pakistan, Israel and North Korea – is destined to grow, along with the likelihood that terrorists will one day get their hands on nuclear weaponry.