Avijit Roy and his wife, Rafida Ahmed, attacked with machetes in Dhaka 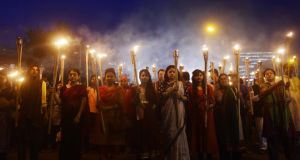 Bangladeshi secular activists take part in a torch-lit protest against the killing of US blogger of Bangladeshi origin, Avijit Roy. Photograph: AFP Photo

Hundreds of people have taken to the streets of Dhaka in protest at the murder of a prominent secular American blogger of Bangladeshi origin who was hacked to death with machetes after he allegedly received threats from Islamists.

Avijit Roy and his wife, Rafida Ahmed, were attacked on a crowded pavement as they were returning from a book fair at Dhaka University. Ahmed, who is also a blogger, lost a finger and remains under treatment at the Square hospital in Dhaka.

The attack took place about 8.45pm on Thursday evening when a group of men ambushed the couple as they walked toward a roadside tea stall, with at least two of the attackers hitting them with meat cleavers. The attackers then ran off into the crowds. Two blood-stained cleavers were found after the attack, said police.

A tweet from Ansar Bangla 7, a previously unknown fundamentalist group, said: “Anti-Islamic blogger US-Bengali citizen Avijit Roy is assassinated in capital #Dhaka due to his crime against #Islam.”

“There have been Facebook posts stating Avijit Roy cannot be killed because he lives in America. He would be killed when he arrives in Dhaka. They must have followed his movement,” Ajoy Roy, Avijit’s father, said. He criticised the police for failing to act despite being allegedly just metres away from the scene of the attack.

Hundreds of people – including teachers, publishers and fellow writers – joined a rally yesterday carrying banners saying: “We want justice” and “Down with fundamentalism”.

Mr Roy, who was 42, had been a target of extremist groups for at least five years because of his writings on secular and lesbian and gay issues in his columns and blogs, his father said. “There isn’t one specific writing I can think of which caused this attack on him,” he added.

Mr Roy, a mechanical engineer, was a regular columnist of the Bangladeshi news agency bdnews24.com. He had written about 10 books, including the best-selling Biswasher Virus (Virus of Faith), as well as his blog, which championed liberal secular writing in the Muslim-majority nation.

“His murder only highlights the point, being made consistently by many, that much more needed to be done to protect these people and the state has been failing to do its job,” Toufique Imrose Khalidi, editor of bdnews24.com, said.

Mr Roy is the second blogger suspected to have been killed by fundamentalist groups in two years. Ahmed Rajib Haider was killed in February 2013 for posts antagonising extremist groups.