Australian election set for next month 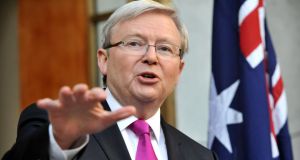 Australia’s prime minister Kevin Rudd says that the country’s federal election, to be held on Saturday, September 7th, is about who Australians can trust to run the economy.

Mr Rudd officially announced the election just after 4pm local time yesterday (7am Irish time), but had sent an email to Labor Party members a half hour earlier, declaring “It’s on”.

“This election will be about who the Australian people trust to best lead them through the difficult new economic challenges which now lie ahead,” Mr Rudd told reporters.

He accused opposition leader Tony Abbott of negativity and said the country faces a choice between “a new way for the future with positive plans for managing the new economic challenges we face, as opposed to the old negative politics and three-word slogans of the past.

“Australia is too open and positive a nation to retreat into a tight little ball of negativity,” said Mr Rudd.

Mr Abbott says the election is really about “who is more fair dinkum”.

Carbon tax
He said if his Liberal-National Coalition wins the election it would scrap the country’s carbon tax and stop asylum seeker boats from coming to Australia.

“The choice is between the positive plans of the coalition and more of the same under the Australian Labor Party and Mr Rudd.

“I am determined, my team is determined, to build a better Australia, with specific improvements that we will deliver,” said Mr Abbott.

Though Labor’s polling numbers have improved dramatically since Mr Rudd became prime minister for the second time on June 27th after challenging Julia Gillard for leadership, he said he is the underdog in the campaign. “In fact my political advisers tell me if we had an election yesterday Mr Abbott would be prime minister as of today,” Mr Rudd said.

The average of all the polls taken since Mr Rudd returned as prime minister has been 50:50 after preferences, but Labor would lose on those numbers because of where the votes are coming from.

It has been in a minority government for the past three years, only retaining power thanks to independents and the Greens. Two of those independents are not seeking re-election and their seats are all but certain to be won by the National Party. This would leave Labor needing to win five seats from the coalition to retain power.

An online bookmaker which takes bets in each of the 150 electorates, says on current projections Labor will lose six seats to end up with 65, while the conservative coalition will win power with 82 seats.

“The Liberal Party has been running around the place for three years raising a bucketload of money in order to get Mr Abbott into the Lodge [the prime minister’s official residence],” he said.

Mr Rudd added that “vested interests”, including tobacco companies, had donated large sums to the coalition, which would “outspend the Labor Party massively in this campaign”.

Greens leader Christine Milne said her party stands apart from Labor and the coalition by offering genuine environmental protection and humane policies on asylum seekers. “Australians will have the choice between the compassion offered by the Greens and the cruelty of the old parties,” she said. “We live in a society, not an economy.”

As well as all 150 House of Representatives seats being decided in the election, half of the Senate’s 76 seats are also being voted on.