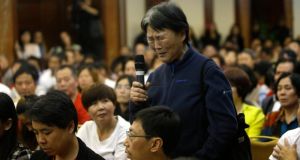 A relative of five passengers who were on board Malaysia Airlines flight MH370 cries before she speaks to Malaysian representatives during a briefing at Lido Hotel in Beijing. Photograph: Jason Lee/Reuters

Angry relatives of people missing on Malaysian Airline flight MH370 held some members of the carrier’s staff for more than 10 hours in a hotel in Beijing, the airline said today.

The jetliner vanished on March 8 with 239 people on board while on a flight from Kuala Lumpur to Beijing. Many of the passengers were from China and their relatives have grown increasingly frustrated with the failure of a multi-national search to find any trace of the plane.

More than 200 family members held 10 Malaysian Airline staff after a briefing at a Beijing hotel, only releasing them early today, the airline said.

“Malaysia Airlines confirms that its staff were held at the Lido Hotel ballroom in Beijing by the family members of MH370 as the families expressed dissatisfaction in obtaining details of the missing aircraft,” the airline said.

In another incident, a Chinese family member attacked a Malaysian Airline’s security supervisor on duty at same hotel on Tuesday, the airline said.

The member of staff sustained a light injury and the airline had filed a police report, it added.

The search for missing airliner is likely to drag on for years, a senior US defence official said earlier today, as an underwater search for any trace of the plane’s wreckage off west Australia appeared to have failed.