Analysis: With Pyongyang backed into a corner, few rule out another deadly skirmish 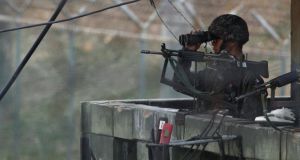 A South Korean soldier looks to the north through a pair of binoculars at an observation post near the demilitarised zone that separates the two Koreas in Paju, north of Seoul. Photograph: Reuters/Kim Hong-Ji

Office workers and shoppers throng the streets of Seoul. The bars and restaurants of downtown Jung-gu are crowded with people winding down for the weekend. Korean television carries the usual light mix of melodramatic soaps and noisy entertainment programmes.

Roughly 60km north of here, South Korea’s seemingly apoplectic neighbour churns out almost daily threats to start a nuclear war. Military intelligence in Seoul said yesterday the North had loaded two mid-range missiles on to mobile launchers in preparation for a possible launch. US B52 bombers and stealth fighters were poised to retaliate. If the 10 million citizens of this crowded capital are concerned, they hide it well.

“South Koreans are immunised against this sort of thing,” says Prof Ahn Yinhay, professor of international studies at Korea University. “The North has been crying wolf for some time.”

In the 1990s, she recalls, similar threats of war triggered mass panic buying in this city. “Nobody is doing that now. In any case, if war happens, where can we hide? The North has nuclear weapons.”

The Korean peninsula is famously one of the most militarised places on the planet, with one million troops on either side of the 250km demilitarised zone that divides it, and another 30,000 US troops in the South. American satellites constantly monitor life inside the isolated North, which has carried out three increasingly sophisticated nuclear tests. A war would likely drag in not just the US but probably China and Japan too. Seoul might well be its first casualty. Yet most analysts say all-out conflict is unlikely.

“Considering the size of forces on such a small place, I think both sides have a pretty good record of keeping it under control,” says Lee Hong-Koo, chairman of the Seoul Forum for International Affairs, a think tank. “The current crisis is serious but not unexpected.” Still, he accepts things could get out of hand. “When you are mobilising there is always that possibility, but I don’t think it is a very high possibility.”


Routine of crisis
Despite its unusually high pitch, there is a large degree of routine underlying the current crisis. North-South frictions often spike in spring, during joint US-South Korean military exercises, which Pyongyang considers a prelude to invasion. This year, Pyongyang was already angry at UN security resolution 2094, passed last month, which imposed new sanctions on the Kim regime. Tensions were elevated by the very public deployment of American B52 and B2 aircraft, carrying the implied threat of nuclear weapons.

North Korea’s national identity is hinged around the outcome of the fratricidal US-backed war of 1950-1953 that created these irreconcilable regimes, held apart since by a brittle truce. Pyongyang keeps memories of that war vividly alive, and Washington helps to reinforce them.

Every North Korean child knows the last time B52 bombers were dispatched. For a month in 1976, after a border skirmish, the US sent bombers up and down the Korean peninsula, veering off at the last moment. “I have never seen the North Koreans so scared,” US secretary of state Henry Kissinger said at the time.

The North had been demanding a peace treaty with the US since the early 1970s but Cold War politics blocked it. Since then, Seoul and its Washington ally have staged these biannual military drills, a few miles from the demilitarised zone. The drills include a simulated nuclear strike.

Despite the end of the Cold War and a decade of détente in the 1990s, both sides are still held in the grip of mutual suspicion and loathing of the other.


Impoverished state
Decades of high military spending and economic stagnation have left the North impoverished, starving and bankrupt. Under these circumstances, nuclear weapons are a logical and effective security strategy, for Pyongyang, said Geun-Shik Kim, professor of North Korean studies at Kyungnam University.

“With nuclear arms as a lever, it does not need to spend greatly on defence and can instead use whatever resources left to restore its economy,” she told the Korea JoongAng newspaper.

In the absence of a permanent peace treaty with Washington and Seoul, the North will continue to use nuclear threats until it gets security guarantees while it rebuilds its economy.

This week, after six decades of “slow-motion war thinly covered by the 1953 armistice agreement”, Pyongyang finally snapped, says Leonid Petrov, a North Korea expert at the Australian National University. “By proclaiming a ‘state of war’ with South Korea and the US, Kim Jong-un is simply reminding the world about this unresolved problem inherited from the Cold War era.”

Dr Petrov also says full-scale conflict is unlikely. But with Pyongyang now backed into a corner, few are ruling out another deadly skirmish. Two years ago, the North’s forces shelled the frontier island of Yeonpyeong during joint US-Korea drills, killing four people. One of the CIA’s top North Korean analysts, Sue Mi Terry, this week predicted a similar attack.


Pressure to retaliate
If that happens, the South’s untested new president, Park Geun-hye, will be under irresistible pressure to retaliate, predicts Prof Ahn. She says Ms Park’s predecessor, Lee Myung-Bak, was bitterly criticised for failing to respond to the Yeonpyeong and other attacks. “Whatever happens, there will be a response this time,” she says. “Whether it escalates or not, most South Koreans really think that we have to respond. And the president understands that.”

What that means in practice is unclear. Will Pyongyang pull in its horns or retaliate in kind? North of the border, another untested leader, Kim Jong-un, is also trying to prove his mettle. Analysts say he may decide on a show of strength ahead of a visit to Seoul by US secretary of state John Kerry, next Friday. The next chance to defuse the crisis comes in May, when Ms Park meets Barack Obama in Washington.

Prof Kim says the stakes are extremely high. “Park must pack an inventive strategy in her briefcase before she boards the plane.”


David McNeill is reporting from Seoul.
He is an Irish Times correspondent
based in Tokyo