Appeals likely to follow verdicts of 529 death sentences in Egypt 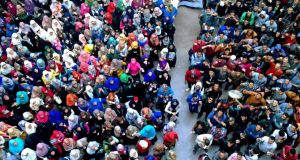 The announcement yesterday of the verdict of 529 death sentences on defendants charged with killing a single police officer in the southern Egyptian town of Minya is one of the most extraordinary events to have taken place in a country which has witnessed a sequence of unexpected and sometimes shocking events since the overthrow of long-time president Husni Mubarak in February 2011. The death sentences were issued a mere three days into the trial of some 545 defendants – 16 were acquitted – and at which only 147 were present. The rest are on the run and were being tried in absentia. The verdicts will now be forwarded to the State Mufti for approval. Under Egyptian law, the Mufti, who is the primary source of religious authority within the state, must approve or reject the verdict. Less than a week ago, the Mufti approved death sentences issued in absentia for 26 people charged with terrorist offences. However, his decision is not final and the likelihood is that there will be further appeals against the sentences, not least in light of reports that defence lawyers were not allowed into the courtroom in Minya to hear the verdicts.

Regardless of its outcome, the case represents the most significant assault on the Muslim Brotherhood since the deaths in August of last year of between 600 and 900 people, when the government deployed security forces to remove demonstrators who were protesting the removal by the Egyptian military of elected president Muhammad Mursi on July 3rd. To many observers, the verdicts in Minya yesterday will further vindicate the view that the “deep state” has returned to dominance in Egypt and that the revolution of 2011 is now well and truly dead.

Since the Mursi government, which, whatever its many faults, was the first freely elected government in the modern history of the Egyptian state, was removed from power, the country has witnessed a series of steps that seem to have entrenched the power of old elites. Islamist opposition has been brutally suppressed while secular and liberal forces have been co-opted or marginalised. Indeed, the coup which overthrew Mursi followed a sustained campaign, led by many of those who had opposed Mubarak two years earlier. This campaign had as its objective the intervention by the army to unseat a regime that many felt had abandoned the ideals of the 2011 uprising. Egyptian liberals supported the military in the naive belief that “the army and the people are one hand” as the revolutionary slogan had it. The reality is that while Egypt may not simply have returned to status quo ante – the power of the old ruling party, the National Democratic Party, is undoubtedly diminished – the dominance of the military is secure for the indefinite future.

There will no doubt be international criticism of the verdicts in Minya. The US is “deeply concerned” about the death sentences handed down, according to reports from the State Department. It seems likely that the European Union will follow suit. However, international reaction to recent events in Egypt has been contradictory at best and whether or not the opinions of American or European leaders will have real impact is very much to be doubted.

Faced with the events of last July, the Obama administration did everything possible to avoid characterising the intervention of the Egyptian military to remove an elected, if deeply unpopular government, as a coup. To do so would have triggered a cut-off of US aid to Egypt. Similarly, although European leaders, including EU foreign policy chief, Catherine Ashton, called on all concerned to return to the democratic process, at no point was European aid to Egypt called into question. Unless the Minya verdicts are actually carried out, and this is highly unlikely, despite Egypt’s poor record on the death penalty, the US and Europe will continue to find it convenient to deal with the post-Mursi order.

But, this is not to say that this order is any more sustainable in the long-term than was the regime of Husni Mubarak. Since its foundation in 1928, the Muslim Brotherhood has endured repression by successive Egyptian governments but none has succeeded in suppressing it entirely. Early cordial relations with the plotters of the 1952 coup which overthrew the monarchy were quickly followed by its suppression by Nasser in 1954 when it challenged the power of the new revolutionary regime. Nasser’s successors in office, Anwar al-Sadat and Husni Mubarak, in turn, sought to co-opt the organisation, but resorted to repression when it threatened their monopolistic grip on power.

Faced with radical Islamist violence in the 1990s, the Mubarak regime abandoned any distinction between the violence of small and radical groups like the Egyptian Jihad Organisation, or the Gama’a Islamiyya, and the mainstream Muslim Brotherhood, the leadership of which had renounced violence in the late 1960s. In that crackdown on Islamism, the then minister of the interior espoused a policy of what he termed “scientific counter-terrorism”. To most observers this amounted to little more than a policy of shoot-to-kill. Over the course of the 1990s, up to 2,000 Egyptians lost their lives as a result of political violence. Already, it is estimated that 1,500 people have died since the overthrow of the Mursi government last year. The death sentences issued on Monday offer little hope of any imminent end to the pattern of political violence in Egypt.

Dr Vincent Durac lectures in Middle East Politics in the School of Politics and International Relations in University College Dublin.