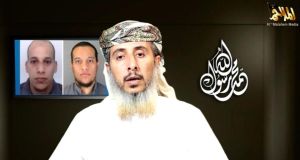 Nasser bin Ali al-Ansi, a leader of the Yemeni branch of al Qaeda (Aqap), speaks via a video posted on YouTube. Photograph: Reuters/YouTube via Reuters TV

For Osama bin Laden and Anwar al-Awlaki, al-Qaeda leaders assassinated by the US at a five-month interval in 2011, Wednesday’s claim of responsibility for the attack on Charlie Hebdo was a blow from beyond the grave.

“As for the blessed Battle of Paris, we . . . claim responsibility for this operation as vengeance for the Messenger of God,” Nasser bin Ali al-Ansi, a leader of al-Qaeda in the Arabian Peninsula (Aqap), said in a video posted on YouTube and authenticated by experts.

Ansi wore a paisley scarf wrapped turban-style on the top of his head and sported a scraggly, grey, white and orange beard. Photographs of Chérif and Said Kouachi, the French brothers who killed 12 people in Paris on January 7th, hung on the wall behind him.

Ansi said the attack was ordered by al-Qaeda leader Ayman al-Zawahri, in accordance with the wishes of bin Laden, who was killed by US commandos in Pakistan on May 2nd, 2011.

He further stated that the “arrangement” for the attack was made by Awlaki, the US-born cleric who was killed by a drone in Yemen on September 30th, 2011. Awlaki’s charisma, eloquence in English and mastery of electronic media made him al-Qaeda’s star recruiter of western Muslims. Awlaki “threatens the West both in his life and after his martyrdom”, the Aqap statement said.

Ansi mocked the world leaders who participated in the 1.5 million-strong Paris march on Sunday, saying they were “dressing their wounds”. International recruits The claim is a fillip to Aqap, which had lost ground to the rival jihad group Islamic State. IS victories in Iraq and Syria over the past year have proved a magnet to thousands of international recruits, especially from the US and Europe.

In Syria, the al-Qaeda affiliate al-Nosra is at war with IS. Last week, al-Nosra accused IS of killing 15 of its fighters. Aqap has called Abu Bakr al-Baghdadi, the self-appointed “caliph” of Islamic State, a “source of sedition” and declared his “caliphate” to be “illegitimate”.

Yet three days of Paris attacks that claimed 17 lives were co-ordinated between gunmen who claimed to represent both groups. The Kouachis told witnesses at the scene of the Charlie Hebdo massacre, and a motorist whose car they stole at gunpoint: “Tell them it’s al-Qaeda in Yemen.” (That group merged with al-Qaeda in Saudi Arabia to form Aqap in 2009, the year Said Kouachi went to Yemen.) A few hours before he died, Chérif Kouachi telephoned BFM television to say that he and his brother had been financed by Awlaki.

Ahmedy Coulibaly, who killed four men in a kosher supermarket, claimed he was mandated by IS. Experts say it’s unlikely that Aqap and IS approved a joint operation. The “synchronisation” vaunted by Coulibaly is more likely a result of his friendship with Chérif Kouachi, whom he met in prison in 2005, long before IS broke off from al-Qaeda in Iraq.

The average age of Islamic State recruits is 22. The Kouachi brothers were in their 30s, and thus representative of an older generation of jihadis who remain loyal to al-Qaeda.

The video and press statement issued by Aqap was smoothly edited and bore its official insignia. A posthumous video which Coulibaly’s accomplices – who are still at large – put together was an amateur production that did not come from IS’s propaganda wing.

According to media reports, Said Kouachi went to the Yemeni capital Sana’a six years ago. He enrolled at the “Sana’a Language School” in the old city and became fast friends with a fellow student from Nigeria, Umar Farouk Abdulmutallab, who lived across the hall in the four-floor brick dormitory.

On Christmas day, 2009, Abdulmutallab tried to blow up an Amsterdam-Detroit flight with a bomb concealed in his underwear and devised by Aqap. Awlaki praised both his “students”, Abdulmutallab and the US army psychiatrist Nidal Hasan, who killed 13 people at Fort Hood, Texas, in November 2009.

Said Kouachi spent most of 2009-2011 in Yemen, disappearing for periods when he is believed to have been in Aqap training camps. After a conviction for plotting to break a fellow Islamist out of prison, Chérif was supposed to turn his identity papers over to French police, and was supposed to check in with authorities weekly. Yet he joined Said for three weeks in Yemen in the summer of 2011. The brothers allegedly met Awlaki before returning to France in mid-August 2011.

The video did not explain why the Kouachis waited three and a half years to execute Awlaki’s orders. Death threats Awlaki was obsessed with the cartoons of the Prophet Muhammad published by the Danish newspaper Jyllands-Posten in 2005. Inspire, the English-language magazine he founded, repeatedly issued death threats to cartoonists.

“It is better to support the Prophet by attacking those who slander him than it is to travel to lands of jihad like Iraq or Afghanistan,” Awlaki wrote.

Awlaki has been linked to a dozen Islamist attacks in the US and Europe, including 9/11, the 2005 London Tube bombings, Fort Hood, the “under-bomber”, failed attempts to bring down cargo aircraft with booby-trapped printer cartridges, and the failed car-bombing of Times Square.

Yet Awlaki was a US citizen, born in New Mexico in 1971. The son of a Yemeni university professor, he studied at Colorado State, San Diego State and George Washington universities.

With his bookish, wire-rimmed glasses and charm, he was long considered a “moderate” Muslim. He gave interviews about Islam to mainstream US media in the wake of 9/11, and once conducted a prayer service at the US Capitol. His father, Nasser, who struggled unsuccessfuly to have Awlaki removed from the CIA’s hit list, called him “an all-American boy”.

Awlaki eventually showed his true colours, in lectures and sermons that proved far more effective than bin Laden’s stilted audio-tapes. Awlaki was, one of his former students told the New York Times, “the man who translated jihad into English”.

Now that the origins of the Charlie Hebdo massacre have become clearer, one might add that Awlaki also translated jihad into French.