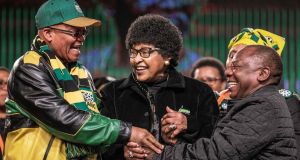 A “war” is raging inside the African National Congress, South African president Jacob Zuma told delegates during his closing speech at the ruling party’s national policy conference on Wednesday.

The 4,000 ANC branch representatives, who debated a range of policies at the six-day conference in Soweto, were urged to unite behind the former liberation movement, which is beset by factionalism, corruption and a dwindling support base.

“There is a war that is silent, and that destabilises ANC. It can’t be right,” Mr Zuma told the delegates.

The numerous policy discussions that took place at the event are seen by many as proxies for the leadership battle that is raging inside the ANC.

Mr Zuma and his top five officials are due to stand down from their party positions in December, and he is not expected to seek re-election, although he will continue as South African president. As a result, the race to replace him in the ANC has started.

Both candidates’ supporters have been pushing policy agendas at the conference that reflect their faction’s ideological positions on a range of issues affecting the ruling party, the economy and society in general.

So the recommendations that come out of the discussions give observers an idea of how Ms Dlamini-Zuma and Mr Ramaphosa are perceived by the people who will decide their political fate at the end of this year.

Land expropriation without compensation, monopoly capital, corruption, and factionalism in the ANC were among the debates that dominated the conference.

Mr Zuma’s supporters arrived at the event determined to make the ills of South Africa’s beleaguered economy all about “white monopoly capital”, as in the large white-owned corporations that dominate it at the expense of emerging black businesses.

However, strategy and tactics commission chair Joel Netshitenzhe told reporters on Tuesday that nine out of the 11 commissions tasked with overseeing the various discussion themes agreed that monopoly capital should not be racially defined and that it was not the enemy.

The policy conference also exposed deep divisions within the ANC over the controversial issue of expropriating land without compensation, which many white landowners believe will be directed at them. The motion was pushed through by Mr Zuma and his home province of KwaZulu-Natal after a fierce debate, according to local new reports.

In addition, ANC delegates proposed numerous internal changes to the party’s structure to arrest the scourge of corruption, which continues to harm the governing party’s image with voters.

Recommendations included strengthening the integrity committee adopted in the last policy conference and making provincial, national and regional secretaries responsible and accountable for acting on allegations of corruption.

Mr Zuma confirmed in his address that he has recommended the party create two deputy president positions to deal with factionalism, so that the runner up for the main deputy post in future party elections can still be accommodated.

All of the recommendations that were adopted at the conference will now be sent back to the ANC branches for further discussion. They will then be tabled for formal adoption at the ANC elective conference.

1 Cancellations and confusion as coronavirus threat edges closer
2 Coronavirus: What we know so far about how Ireland is affected
3 Conor Murphy told at Sinn Féin rally he has nothing to apologise for
4 Mass gatherings due to go ahead in Ireland amid coronavirus outbreak
5 What is coronavirus and what should I do if I have symptoms?
Real news has value SUBSCRIBE