US aircraft ‘hit by incoming fire’ over South Sudan

Three injured, one critically, in incident which saw plane divert to Kampala in Uganda 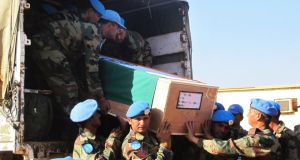 A United Nations handout photograph shows the remains of two peacekeepers from the UN Indian Battalion arriving to Juba, South Sudan. The soldiers were killed in action on Thursday. Photograph: EPA/UN/Handout.

Two US military aircraft responding to the outbreak of violence in South Sudan were hit by incoming fire, wounding three US service members.

Officials said the aircraft were heading to Bor, the capital of the state of Jonglei and scene of some of the nation’s worst violence over the last week. It is believed the aircraft was hit by incoming fire from South Sudan rebels.

One of the wounded service members was reported to be in critical condition. Officials said after the aircraft turned around and headed to Kampala, Uganda after the incident.

From there the service members flew on to Nairobi, Kenya for medical treatment.

African mediators today sought to meet rivals to South Sudan’s president in a bid to end the fighting that threatens to drag the world’s newest country into an ethnic civil war.

Hundreds of people have been killed in nearly a week of clashes that spread from the capital Juba and have reached vital oilfields, deepening the most serious internal crisis since the state won independence two years ago.

President Salva Kiir, of the Dinka ethnic group, has accused his former vice president Riek Machar, a Nuer who was sacked in July, of trying to seize power. Although Juba, the capital, appeared calm today, United Nations staff say hundreds of people have been killed across the country the size of France and that 35,000 civilians are sheltering at their bases.

The United States was instrumental in securing South Sudan’s independence, and, in a sign of its concern, US secretary of state John Kerry said he was sending an envoy to help talks.

South Sudan’s foreign minister, Barnaba Marial Benjamin, said the mediators had now been given the go-ahead to meet with Mr Kiir’s rivals, including Mr Machar and his allies.

“Let them also get confirmation from them that they are willing to dialogue,” Mr Benjamin said by phone, adding that Mr Kiir would have no problem speaking to Mr Machar.

The United Nations said yesterday at least 11 people from the ethnic Dinka group had been killed during an attack by thousands of armed youths from another ethnic group on a UN peacekeeping base in Jonglei state. Two Indian peacekeepers died.