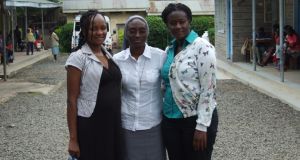 Caroline Nganga, Sr Ursla Agga, Lydia Birongo at the Medical Missionaries of Mary Mukuru Health Centre: They are only too aware of how endemic challenges such as gender-based violence and patriarchy are in the slum, and how difficult it will be to overcome them. Photograph: Bill Corcoran 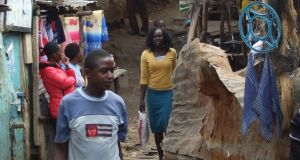 Street life in Mukuru – a slum in Nairobi, Kenya: The level of scepticism expressed by many Kenyans around the feasibility of the UN Sustainable Development Goals is rooted in the fact they have heard little from their government about the agenda. Photograph: Bill Corcoran 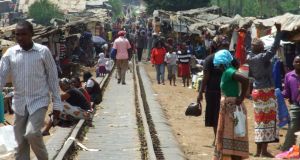 Mukuru slum in Nairobi, Kenya: Poverty, inequality and injustice are inextricably tangled in the daily lives of the estimated 200,000 people who call this patch of industrial wasteland their home. Photograph: Bill Corcoran

When representatives of Kenya’s government attended the 71st session of the United Nations General Assembly in New York recently, its delegation claimed the country was on track to achieve the Sustainable Development Goals (SDGs).

Adopted by 193 UN member states a year ago, the objectives are far more broad-based than their predecessors, the Millennium Development Goals, ranging from eradicating poverty and achieving gender equality, to establishing sustainable communities and cities.

According to development experts, the Sustainable Development Goals framework has brought all three aspects of sustainable development – the economic, social and environmental – together in a more integrated way than the earlier programme ever did.

However, critics of the 17 goals, which have 169 vague targets, suggest SDG should stand for “senseless, dreamy and garbled” rather than representing the future of global development.

They point to examples such as target 12.8 which states: “By 2030, ensure that people everywhere have the relevant information and awareness for sustainable development and lifestyles in harmony with nature.”

Despite the high degree of scepticism around the goals, Kenya’s cabinet secretary for public service, youth and gender affairs Sicily Kariuki says that, while achieving them was highly ambitious, the government had already made progress in a number of areas.

“We have made progress on matters around women and youth empowerment; no other government has allocated as many resources to the youth and women. So, we may not be there yet, but we are on the right path,” New York-based Kariuki says.

Kenya co-facilitated with Ireland the inter-governmental talks that resulted in UN member states adopting the goals in 2015 and much is expected from the African nation over the implementation period (2016-2030) as a result.

In recent years Kenya has begun a process of devolution which the World Bank cites as one of the most rapid and ambitious in the world, and UN officials believe this augurs well for implementation of the changes required to meet the goals at local government level.

The Kenyan road map for the goals, which was presented to the UN General Assembly, has taken stock of where the country went wrong when trying to achieve the eight earlier objectives, and has tried to rectify its approach for the future.

For instance, it stipulates that data gathering and the close monitoring of the process of integrating the goals into local policies is critical to identifying gaps. So too is capacity building within public institutions and educating citizens.

Most of the developmental challenges the UN hopes to tackle using the goals converge in Mukuru, a slum in the Kenyan capital Nairobi. Poverty, inequality and injustice are inextricably tangled in the daily lives of the estimated 200,000 people who call this patch of industrial wasteland their home.

Piped drinking water and proper sanitation are non-existent, and the little infrastructure that does exist in Mukuru is old and defective.

Violence against women is also at epidemic proportions here, fuelled by a patriarchal culture and alcohol abuse. Unemployment and a sense of hopelessness are rife, especially among the youth.

At the heart of the slum situated in the east of the Kenyan capital is the Medical Missionaries of Mary Health Centre, a tree-lined oasis located next to Mukuru’s police station, which is run by the affable Sr Ursla Agge.

She expresses her reservations about whether Kenya and its UN partners could make significant progress with the goals in Mukuru before the 2030 deadline, especially in relation to gender equality.

Sr Agge and her social worker colleague Lydia Birongo witness first-hand how endemic challenges such as gender-based violence and patriarchy are in Mukuru, and how difficult it will be to overcome them.

“Equity and gender equality is very far from being achieved here, and I can’t see it happening in 15 years,” says Agge. “If they [the government and UN] want to achieve this, it has to start from the ground up, and not the top down.”

Birongo adds: “In Kenya women are naturally submissive, so efforts to empower them are not taken on board because they feel they are going against their culture. Breaking down patriarchy here can only be done in small steps, and it will take a lifetime to achieve.”

The level of scepticism expressed by many Kenyans around the feasibility of the goals is partially rooted in the fact they have heard little from their government about the development agenda so far. Nobody else The Irish Times spoke to in Mukuru had even heard of the goals.

Siddharth Chatterjee, the recently appointed United Nations resident co-ordinator to Kenya, believes the need to bring broad-based awareness about the goals to Kenyan society is essential to their successful roll-out.

Chatterjee maintains the UN has already begun a synchronised process of advocacy and sensitisation around the goals for members of government and civil society in the hope that the development agenda would soon be understood.

While the UN’s enthusiasm for the goals is well publicised, it will be the national government’s ability to integrate the individual objectives into their own development agenda that will define how successful their implementation is in Kenya.

With that in mind, Chartterjee insists that targeting improvements that are achievable should be at the top of a country’s development agenda, rather than trying to achieve as many goals as possible.

“It is important to understand that the SDGs are a menu of goals that each country can choose from,” he says, “and no one is saying that you have to do it all”.