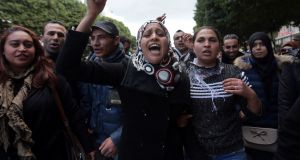 Demonstrators in Tunis, Tunisia: At least 19 people were arrested in the capital in connection with the unrest. Photograph: Mohamed Messara/EPA

Tunisia declared a nationwide curfew on Friday after four days of protests and rioting over jobs and economic conditions, the worst unrest since an uprising five years ago that toppled autocrat Zine El Abidine Ben Ali. The revolutionary momentum of those events spread to a number of other countries in the region in a wave of protest that became known as the Arab Spring.

There were further demonstrations on Friday in several regions, including Kasserine and Sidi Bouzid. In Tunis, demonstrators blocked a major thoroughfare and burned tyres in the street. At least 19 people were arrested in the capital in connection with the unrest, a security official said.

Tunisia has been held up as a model for democratic progress since the 2011 revolution that toppled Ben Ali. But there has been growing discontent over a lack of jobs and high living costs, especially in the country’s interior.

There is also concern over attacks by Islamist militants, including an assault on a beach resort in June that killed 39.

The interior ministry said in a statement that due to the risk to public and private property from the protests it was imposing a curfew from 8pm to 5am with immediate effect.

The protests started on Tuesday in the impoverished central town of Kasserine after a young man who was apparently being refused a public sector job killed himself. They have seen demonstrators storm local government buildings and clash with riot police. One policeman has been killed and dozens injured.