Laurence (Larry) Hayes, who died during the Tunisian shootings this week 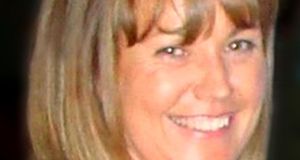 Lorna Carty from Co Meath, who died in the attack in Sousse, Tunisia. Photograph: PhotopressBelfast.co.uk 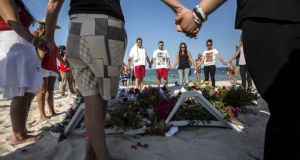 People hold hands as they pray in a circle around bouquets of flowers laid in tribute on the beach of the Imperial Marhaba resort, which was attacked by a gunman, in Sousse, Tunisia, June 28th, 2015. Photograph: Zohra Bensemra/Reuters

A couple from Athlone killed in the Tunisia beach massacre had been due to return home just hours after the attack took place.

Laurence and Martina Hayes, a couple in their 50s, were on the last day of their holiday at the Imperial Marhaba Hotel on the beach in Kantawi.

Laurence - also known as Larry - Hayes was a school transport inspector with Bus Éireann and had worked with company for just over 20 years in Athlone.

In a statement, Bus Éireann said Mr Hayes was “highly regarded on both a personal and professional level” by all his colleagues.

“The company wish to extend its deepest sympathies and condolences to the family and friends of Larry Hayes and his wife Martina.

“Our thoughts and prayers are with the couple’s daughter at this difficult time, and all the extended family.”

Prayers were offered for the couple at churches in Athlone and Co Roscommon, where Ms Hayes is originally from.

The couple is survived by their adult daughter, who has been in contact with officials from the Department of Foreign Affairs.

She had been on holidays with her husband Declan, a dairy farmer. They had received the Tunisian holiday as a gift from a relative, as Mr Carty was recovering from heart surgery.

Their daughter Hazel (18) has just completed her Leaving Cert and is believed to have been notified of her mother’s death while on holiday in Turkey. Their son Simon (21), a science student at UCD, was at home in Robinstown.

Minister for Foreign Affairs Charlie Flanagan said there was no reason to believe there were any other Irish among the injured.

He urged anyone planning to travel to the region to exercise “extreme caution”.

“I would urge those there to continue to liaise with tour operators on the ground and with the consular assistance from Foreign Affairs,” he said.

“The Tunisian authorities have declared the incident to be over but nevertheless I would urge Irish citizens heading there and those in Tunisia to remain extremely vigilant, to follow instructions given to them by the police, the tour operators, the hotels.”

Irish diplomats in Tunisia have been providing assistance to relatives of the victims and are due to complete the final stages of identification and repatriation of remains.

All of the bodies of those killed have been taken to a morgue in Tunis and may only be released once authorities are satisfied as to their identities.

Irish Ambassador to Madrid David Cooney, who has been in Tunisia since Friday, said officials were keen to repatriate the remains of the Irish victims as as soon as possible.

“It’s our absolute priority. We hope it will be resolved within days,” Mr Cooney said.

“This was a particularly brutal and cynical attack,” Mr Cooney said. “The man deliberately targeted Europeans. Most of the victims were middle aged people who just wanted some sunshine and relaxation.”

He also praised the Garda for the assistance they have been providing to victims’ relatives, including retrieving dental records and DNA to enable identification of the bodies.