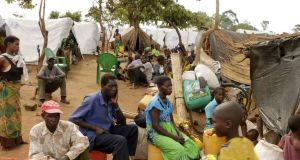 Mozambican refugees wait to register at the Kapise refugee camp on the Mozambican border in Malawi. Photograph: Eldson Chagara/AFP/Getty Images

Messenger is among thousands of Mozambicans who have fled to refugee camps in Malawi in the last month, saying Frelimo government forces are burning homes and killing civilians in a campaign against Renamo guerrillas in an escalation of a simmering conflict between civil war foes.

Spokesmen for Frelimo and Renamo each said the other side was responsible for attacks on their members in various parts of the country but would not give details about the violence that prompted the refugee exodus.

More than half the refugees are children who walked for days from villages in Mozambique’s western Tete province with just the clothes they were wearing. “I could see the houses burning up ahead, then I heard the gunshots and I ran,” said Wit, waiting with hundreds of other children to be given food in a sprawling hilltop camp of makeshift tents.

Security sources say Renamo fighters have been attacking police outposts in recent weeks near the Malawi border where they have public support. Frelimo forces retaliate by torching villages where they believe rebels are hiding.

The violence has stirred memories of a civil war fought between Renamo and Frelimo from 1976 to 1992 in which a million people died and another million fled to Malawi.

Renamo’s leader, Afonso Dhlakama (63) has said he will in March seize control of six northern provinces, declaring autonomy in areas where his party won majorities in 2014’s national election. He has not explained how this would be done but experts believe it would be unconstitutional.

Frelimo won 57 per cent of the 2014 vote against 37 per cent for Renamo. Renamo disputes the result and says Frelimo is to blame for the violence. Both sides say they are democrats but also resort to violence which they are unwilling to acknowledge.