The words of Madiba: the power to move minds

In his words: Mandela’s key speeches 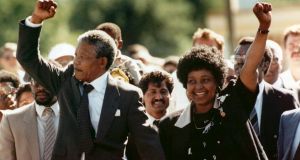 One of the greatest weapons in Nelson Mandela’s armoury was his use of language. His statement from the dock at the 1964 Rivonia trial has become a classic in the annals of courtroom speeches. His inauguration address 30 years later provided one of the late 20th century’s most uplifting moments.

In that time, Mandela’s rhetoric shifted from that of militant firebrand to grandfather of the Rainbow Nation. What never changed was his ability to rise above the din with the well-chosen phrase, or to strike a hopeful tone as South Africa wavered between anarchy and peace.

Often forgotten in his later years was the anger of his early speeches, how he spoke of being “sustained by hatred” of race discrimination. His words mellowed as he got older, as he shifted away from commenting on national politics and instead became something of globally-feted spiritual guru.

Yet, some of that early spirit remained until the end as he spoke, not just with passion but with anger, against poverty, the neglect of children and corruption.

Mandela’s first language was Xhosa, his second English but he was also proficient in Afrikaans and Zulu. This multilingualism informed his political philosophy as he would draw on moral reference points from the UN Declaration of Human Rights to the indigenous ethic of “Ubuntu”, what he called, “that profound African sense that we are human only through the humanity of other human beings”.

Like the best orators, Mandela borrowed from other great speakers. The title of his autobiography was inspired by the statement of India’s first prime minister Jawaharlal Nehru: “There is no easy walk to freedom.” And like many an historical figure, he has had quotes misattributed to him, chief among them: “Our deepest fear is not that we are inadequate. Our deepest fear is that we are powerful beyond measure.”

There is no record of him using these words, as the ANC confirmed some years ago, despite their being emblazoned on many a Robben Island souvenir.
JOE HUMPHREYS

Rivonia trial: Statement from the dock at the opening of the trial where Mandela faced charges of sabotage, Pretoria, April 20th 1964:

I am the first accused. I hold a bachelor’s degree in arts and practised as an attorney in Johannesburg for a number of years in partnership with Oliver Tambo. I am a convicted prisoner serving five years for leaving the country without a permit and for inciting people to go on strike at the end of May 1961.

At the outset, I want to say that the suggestion made by the state in its opening that the struggle in South Africa is under the influence of foreigners or communists is wholly incorrect. I have done whatever I did, both as an individual and as a leader of my people, because of my experience in South Africa and my own proudly felt African background, and not because of what any outsider might have said...

Some of the things so far told to the court are true and some are untrue. I do not, however, deny that I planned sabotage. I did not plan it in a spirit of recklessness, nor because I have any love of violence. I planned it as a result of a calm and sober assessment of the political situation that had arisen after many years of tyranny, exploitation, and oppression of my people by the whites.

I admit immediately that I was one of the persons who helped to form Umkhonto we Sizwe, and that I played a prominent role in its affairs until I was arrested in August 1962...

Above all, we want equal political rights, because without them our disabilities will be permanent. I know this sounds revolutionary to the whites in this country, because the majority of voters will be Africans. This makes the white man fear democracy.

But this fear cannot be allowed to stand in the way of the only solution which will guarantee racial harmony and freedom for all. It is not true that the enfranchisement of all will result in racial domination. Political division, based on colour, is entirely artificial and, when it disappears, so will the domination of one colour group by another. The ANC has spent half a century fighting against racialism. When it triumphs it will not change that policy.

During my lifetime I have dedicated myself to this struggle of the African people. I have fought against white domination, and I have fought against black domination. I have cherished the ideal of a democratic and free society in which all persons live together in harmony and with equal opportunities. It is an ideal which I hope to live for and to achieve. But if needs be, it is an ideal for which I am prepared to die.

I stand here before you not as a prophet but as a humble servant of you, the people. Your tireless and heroic sacrifices have made it possible for me to be here today. I therefore place the remaining years of my life in your hands…

Today the majority of South Africans, black and white, recognise that apartheid has no future. It has to be ended by our own decisive mass action in order to build peace and security. The mass campaign of defiance and other actions of our organisation and people can only culminate in the establishment of democracy. The destruction caused by apartheid on our sub-continent is in- calculable. The fabric of family life of millions of my people has been shattered.

Millions are homeless and unemployed. Our economy lies in ruins and our people are embroiled in political strife. Our resort to the armed struggle in 1960 with the formation of the military wing of the ANC, Umkhonto we Sizwe, was a purely defensive action against the violence of apartheid. The factors which necessitated the armed struggle still exist today. We have no option but to continue. We express the hope that a climate conducive to a negotiated settlement will be created soon so that there may no longer be the need for the armed struggle...

The need to unite the people of our country is as important a task now as it always has been. No individual leader is able to take on this enormous task on his own. It is our task as leaders to place our views before our organisation and to allow the democratic structures to decide…

Our struggle has reached a decisive moment. We call on our people to seize this moment so that the process towards democracy is rapid and uninterrupted. We have waited too long for our freedom. We can no longer wait. Now is the time to intensify the struggle on all fronts. To relax our efforts now would be a mistake which generations to come will not be able to forgive. The sight of freedom looming on the horizon should encourage us to redouble our efforts…

Our march to freedom is irreversible. We must not allow fear to stand in our way...”

Inauguration address:
Speech delivered as he was sworn in as president of South Africa, Union Buildings, Pretoria, May 10th 1994

Today, all of us do, by our presence here, and by our celebrations in other parts of our country and the world,confer glory and hope to newborn liberty. Out of the experience of an extraordinary human disaster that lasted too long, must be born a society of which all humanity will be proud...

The time for the healing of the wounds has come.

The moment to bridge the chasms that divide us has come.

The time to build is upon us.

We have, at last, achieved our political emancipation. We pledge ourselves to liberate all our people from the continuing bondage of poverty, deprivation, suffering, gender and other discrimination.

We succeeded to take our last steps to freedom in conditions of relative peace. We commit ourselves to the construction of a complete, just and lasting peace.

We have triumphed in the effort to implant hope in the breasts of the millions of our people. We enter into a covenant that we shall build the society in which all South Africans, both black and white, will be able to walk tall, without any fear in their hearts, assured of their inalienable right to human dignity - a rainbow nation at peace with itself and the world.

As a token of its commitment to the renewal of our country,the new Interim Government of National Unity will, as a matter of urgency, address the issue of amnesty for various categories of our people who are currently serving terms of imprisonment.

We dedicate this day to all the heroes and heroines in this country and the rest of the world who sacrificed in many ways and surrendered their lives so that we could be free. Their dreams have become reality. Freedom is their reward.

We are both humbled and elevated by the honour and privilege that you, the people of South Africa, have bestowed on us, as the first President of a united, democratic, non-racial and non-sexist South Africa, to lead our country out of the valley of darkness.

We understand it still that there is no easy road to freedom. We know it well that none of us acting alone can achieve success.

We must therefore act together as a united people, for national reconciliation, for nation building, for the birth of a new world.

Let there be justice for all.

Let there be peace for all.

Let there be work, bread, water and salt for all.

Let each know that for each the body, the mind and the soul have been freed to fulfil themselves.

Never, never and never again shall it be that this beautiful land will again experience the oppression of one by another and suffer the indignity of being the skunk of the world.

The sun shall never set on so glorious a human achievement. God bless Africa.