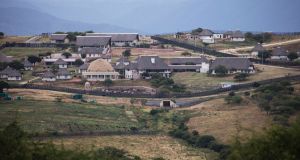 South Africa’s opposition parties have rejected President Jacob Zuma’s recent offer to pay for some of the upgrades to his multimillion-dollar Nklandla home, saying the constitutional court needed to rule on the issue.

Late on Tuesday the presidency released a statement in which Mr Zuma outlined a way to end the drawn-out dispute over upgrades to his private rural residence in KwaZulu-Natal province which cost nearly €20 million.

However, the president subsequently refused to pay, saying he had done nothing wrong. A number of government-initiated reports on the matter came to the conclusion Mr Zuma was not liable for any of the costs, although their impartiality has been questioned.

The main opposition Democratic Alliance (DA) and the Economic Freedom Fighters refused to let the issue lie and took the matter to the constitutional court to secure a ruling.

“While President Zuma remains critical of a number of factual aspects and legal conclusions in the report,” the presidency’s statement said, “he proposes a simple course to implement what the public protector recommended as remedial action contained in the report.”

Mr Zuma, whose proposal was lodged with the constitutional court ahead of the hearing on the matter next week, suggested the finance minister and auditor general should determine the amount he had to pay.

DA leader Mmusi Maimane on Wednesday rubbished Mr Zuma’s offer, saying he needed to have his day in court.

“His head of arguments in the . . . [constitutional court] says he always intended to pay, but that is the exact opposite of what he had said [in parliament]. And now for him to stand in front of the country and say he was intending to pay is quite simply laughable.”

Mr Maimane said the DA would argue that Mr Zuma’s failure to engage rationally with the public protector’s findings and recommended remedial action was manifestly irrational, illegal and unconstitutional.

Why Mr Zuma has suddenly decided to adhere to the public protector’s recommendations remains unclear. A number of political commentators believe he was advised that losing the constitutional court case ahead of his state of the nation address in late February would reflect badly on him.

It has been further noted that local elections are being held later this year, and for the ruling African National Congress party to contest the polls with a leader who has had such a ruling go against him would damage their election campaign.

The constitutional court will decide whether to accept Mr Zuma’s offer ahead of hearing the case on February 9th next.