‘Small girl’ with explosives strapped to her kills five 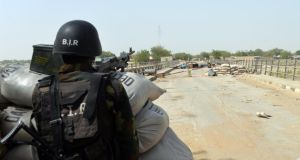 A young girl with explosives strapped to her killed five people and wounded dozens at a security checkpoint outside a market in the northeast Nigerian town of Potiskum on Sunday, witnesses said.

“(She) refused to be checked at the gate to the market and an argument ensued,” witness Ibrahim Maishago said. “She let off the bomb, killing herself and five others, while many were injured.”

No one claimed responsibility for the bombing, which bore the hallmarks of Islamist militant group Boko Haram. The insurgents have suffered a string of defeats in a military offensive by Nigeria and neighbours Cameroon, Niger and Chad.

Resident Bala Potiskum said he saw dozens of wounded being rushed to hospital after the blast.

Both witnesses described the bomber as a “small girl”, estimating that she could not have been more than eight years old.

The Islamist fighters appear to be on the run in many parts of Nigeria and regions near its borders, after being subjected to a major offensive on all sides, but retain the ability to mount deadly surprise attacks.

The use of female suicide bombers, sometimes young girls, has been a common tactic of Boko Haram since last year, as have revenge attacks on civilians when the group is under pressure.

Nigerian forces backed by air strikes seized the northeastern border town of Baga from Boko Haram on Saturday, the military said, a significant victory and one of a string of recent successes.

President Goodluck Jonathan, who has been strongly criticised for not taking tougher action against Boko Haram, faces an election on March 28th in which security is a key issue.