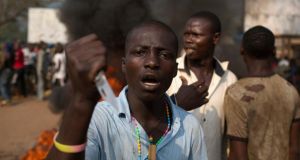 A man reacts as a crowd barricades a street in the capital Bangui yesterday. Central African Republic’s new interim president said on Tuesday she would hold talks with armed groups in an effort to restore order to the former French colony, where at least seven more people were killed in sectarian violence in the north. Photograph: Siegfried Modola/Reuters

The UN chief’s special adviser on genocide prevention is warning of a “high risk of crimes against humanity and of genocide” in the Central African Republic.

Adama Dieng and other UN officials briefed the Security Council yesterday on the continuing and unprecedented violence between Christians and Muslims in one of the world’s poorest countries.

They spoke of children being beheaded, entire villages burned and a complete breakdown of law and order, and they urged the deployment of more peacekeepers as soon as possible.

But they expressed hope at this week’s election of an interim president who is the first female leader in the country’s history, and at the 496 million dollars (€366 million) in humanitarian assistance newly pledged by international donors.

An untold number of people have been killed since a March 2013 coup by Muslim rebels, and the previous peace between Muslims and Christians in the largely rural, landlocked country has been shattered.

“The level of hatred between these communities shocked me,” Mr Dieng said, listing widespread reports of summary executions, mutilation and sexual violence among the “widespread and massive” human rights violations.

Restoring peace will be difficult “without addressing the current culture of impunity,” he added.

The UN officials welcomed the approval by EU foreign ministers this week of a potential joint military force of about 500 troops to assist the roughly 1,600 French troops and about 4,600 African troops trying to restore order.

The UN does not have a peacekeeping force in the country, but there is interest among Security Council members.

“There is a feeling that the situation has deteriorated to a point where it requires as much assistance ... as possible” from both the African force and the UN peacebuilding office in the country, said Jordan’s ambassador to the UN, Prince Zeid al Hussein.

Mr Dieng and the other officials spoke after a visit to the Central African Republic last month as violence spiralled.