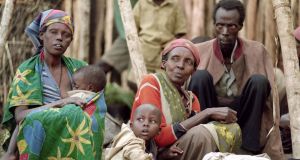 Tutsi refugees in Kabgayi in May 1994: RTLM radio told listeners not to take pity on women and children. Photograph: Alexander Joe/AFP/Getty Images

Two decades ago, in the summer before the Rwandan genocide, it looked as if the escalating tensions might be calming down. Along with a peace agreement, there came a cautious measure of hope for those who sought stability.

The media put a stop to that. One of the most notorious hate-radio stations in history, Radio Television Libres des Milles Collines (RTLM), began broadcasting on July 8th, 1993, nine months before the genocide. Its reach was almost ubiquitous. Its presenters – who included Italian-born Belgian citizen Georges Ruggiu – preached violence, told listeners to “get to work”, and reminded them not to take pity on women and children.

In a country with a high illiteracy rate, radio was hugely influential, and many accepted anything said on it as fact.

Less accessible, but still incredibly influential, was the newspaper Kangura. In early 1994 it carried the headline “Habyarimana will die in March”, over an article explaining that Rwandan president Juvenal Habyarimana would soon be killed. The article opened with the words: “Nothing happens that we did not predict.”

In the 100 days that followed 800,000 Tutsis and moderate Hutus were murdered.

Twenty years later, though the country has achieved peace and stability, the media has still not shaken off the legacy of the role it played in the past.

Reporters Without Borders ranks Rwanda 162nd out of 180 countries in its 2014 Press Freedom Index; below states such as Egypt, Iraq and Ethiopia.

UN special envoy to the Great Lakes region Mary Robinson says she is very aware of the contrast “even between Rwanda and the DRC [Democratic Republic of Congo]”.

Former Irish Army commandant Frank Reidy visited Rwanda in September 1994 and noticed “you’d see people everywhere with radios pressed to their ears”. In 2000 he returned to to work with a radio soap that used the airwaves to educate people about AIDS/HIV and agriculture.

Furaha Amos is on a similar mission. He’s a charismatic and warm 23-year-old who hosts a weekly show on Radio 10 called Ishusho U’EJo Show (“image of yesterday/tomorrow”).

Born in a Ugandan refugee camp, he says no one ever explicitly told him he was Tutsi, but he always felt different. “And I hated that idea when I was growing up.” He uses his show to preach unity and reconciliation but also, he says, to foster debate. “I feel responsible for my kids. I want them to grow up in a different environment to me.”

When asked about the state of media freedom beyond the promotion of positive messages he is careful with his answer.

“I always like to call Rwanda a very young country. It is building a lot of fundamental beliefs in every single department. So knowing how media was used to destroy people’s lives, it is very careful about letting people know what is safe and what is not safe. Now, who decides what is safe? I don’t know.

So he thinks any restrictions are for the purpose of “protecting people”.

“It’s not like we are sitting here wanting to talk about things that we don’t talk about. It’s more like making sure that this time we are talking about constructive things.”

Carina Tertsakian says that interpretation is buying into an excuse. The British senior researcher for Human Rights Watch was denied a work visa by the Rwandan authorities in 2010 and has not been allowed back since.

She says journalists are safe as long as they report on innocuous issues, but if they touch on anything politically sensitive it becomes dangerous.

She believes that, while the Rwandan government has a responsibility to ensure that hate media doesn’t happen again, “the kind of censorship operating today and the threats, prosecutions and attacks against journalists in recent years have nothing to do with that. These journalists were not advocating ethnic hatred.”

She points out that many of those who have fallen foul of the government are Tutsis, who could not be accused of “genocide ideology”.

One of the most notable media crackdowns happened before the last election in 2010, when two independent newspapers were suspended for much of the campaigning period.

On June 24th, 2010 journalist Jean-Léonard Rugambage, who was “highly critical” of president Paul Kagame’s government, was killed in Kigali.

Tertsakian says this had a devastating effect on the few independent journalists who remained in Rwanda, many of whom have since fled because of constant threats.

However, she says that “international guilt” and a desire to “portray Rwanda as a development success” both provide explanations as to why the international community continue to largely ignore these events.

On April 7th, the day of the most high-profile commemoration event, local journalist Cassien Ntamuhanga disappeared in Kigali. Later that week it emerged he had been arrested and accused of planning terrorist attacks and plotting to overthrow the government.

In the past the media often acted as a voice for the ruling party. Today in Rwanda, with dozens of newspapers, magazines and radio stations, this is much less the case. Many will say that self-censorship is now a bigger issue than state censorship.

Innocent Ntagara is a genocide survivor who works with Rwandan orphans through the Barakabaho Foundation.

Before the genocide he worked for a private paper, but was forced to write anonymously. Otherwise, he says, he would have been killed like many of his colleagues.

As journalists, they watched in horror as the encouragement of hatred and violence became worse and worse, but even with that awareness they were still oblivious to what was being planned.

He believes the fact that Kangura predicted President Habyarimana’s death meant that both the newspaper and RTLM were “in on the plan”, a plan which he thinks Habyarimana didn’t agree with.

As a Tutsi, Ntagara was severely beaten when the violence erupted in his province of Butare. He was left for dead in the street and eventually rescued and hidden by a nurse.

When Ntagara talks about the things he experienced and witnessed during the genocide he visibly recoils. Hands in sleeves, back bent, this tall man folds in on himself but speaks decisively. “Control is different than making shut,” he says. “But because we have had a bad experience with the media during the genocide we know the media needs to be controlled.”

And his attitude reflects that of many Rwandans.

This article was supported by the Simon Cumbers Media Fund.