Record number of rhinos killed in Africa in 2015 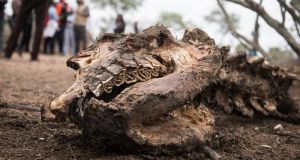 The skull from a white male rhinoceros carcass at the Kruger National Park, South Africa, on Wednesday. The rhino had to be put down by officials from the park after he was shot and injured by poachers. Photograph: Shiraaz Mohamed/EPA

Despite progress made against rhino poaching in South Africa and Kenya last year, the slaughter of the endangered species across the African continent increased for the sixth year in a row in 2015, new research reveals.

At least 1,338 rhinos were killed for their horns in Africa in 2015, according to figures released by the International Union for the Conservation of Nature (IUCN), whose research shows Zimbabwe and Namibia recorded major poaching increases in relation to the animal.

“This is the highest level since the current crisis began to emerge in 2008,” the Switzerland-based body said in a statement.

It is estimated that some 5,940 white and black rhinos have been killed since this latest poaching outbreak began to spike in 2008. There are now only about 25,000 rhinos left worldwide, with the vast majority of these located in Africa – primarily South Africa.

A rhino’s horn is made from keratin, the same substance found in human nails. Despite its lack of medicinal properties, it is highly sought after in Asia, especially China and Vietnam, for use in traditional remedies sold on the black market.

Rhino horn is now one of the world’s most expensive commodities, with experts saying it fetches up to $60,000 (€52,000) per kilo – making it more valuable than cocaine or gold.

Better anti-poaching strategies involving cross-border cooperation, a more confrontational approach to tackling poachers, as well increased security and patrolling by rangers and harsher jail sentences for offenders, have all contributed to achieving this modest success.

But while South Africa and Kenya have recorded lower rhino poaching rates, other countries in the southern Africa region have seen sharp increases in animal losses.

According to ICUN’s new data, the number of rhinos killed in Namibia and Zimbabwe in the last two years quadrupled and doubled respectively.

Conservationists studying the phenomena say that when poaching syndicates are thwarted in one country they just move into another to target animals there instead.

“Despite some encouraging signs in Kenya and South Africa, another record year for rhino poaching in Africa shows that the international criminal gangs still have the upper hand,” World Wildlife Fund’s Elisabeth McLellan said after the data was released.

“It also highlights that enhanced anti-poaching and anti-trafficking efforts are not enough – we also have to focus on reducing demand in Vietnam and China. Innovative campaigns are being targeted at key consumer groups but we urgently need governments to take enforcement action against rhino horn buyers and sellers to stop the illegal trade,” she added.