Obama plans US summit of African leaders in 2014 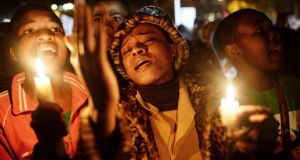 People gather with candles for Nelson Mandela outside the Medi-Clinic Heart Hospital where he is being treated in Pretoria, South Africa. Photograph: Jeff J Mitchell/Getty Images

US president Barack Obama will host a summit of leaders from sub-Saharan Africa next year, the White House has said.

The announcement came as Mr Obama arrived in Cape Town for a poignant visit to Robben Island, where an increasingly frail Nelson Mandela had spent 18 of his 27 years in captivity.

Mr Obama will announce later that “he plans to host the first of its kind, a summit of leaders from across sub-Saharan Africa in the United States”, senior White House adviser Ben Rhodes said.

The plan carries strong echoes of high-profile China-Africa summits, which over the last decade have cemented Beijing’s influence on the continent.

Mr Obama is currently on the first major visit to the continent where his father was born since his initial election as US president almost five years ago.

Mr Obama is wrapping up his South Africa trip with the Robben island visit.

He spoke to members of Mandela’s family and his wife Graça Machel yesterday to express his support for the man he described as a “personal inspiration”.

The 94-year-old anti-apartheid hero remains “critical but stable” in a Pretoria hospital after being admitted for a lung infection three weeks ago.

Mr Obama chose against visiting Mr Mandela in hospital, but privately met two of his daughters, while also speaking to his wife by phone.

“I have drawn strength from the support received from President Barack Obama, Michelle, Malia and Sasha,” said Ms Machel afterwards. “Having taken the time to telephone me to express their solidarity and meet our children, they have added a touch of personal warmth that is characteristic of the Obama family.

“I am humbled by their comfort and messages of strength and inspiration, which I have already conveyed to Madiba.”

Mr Obama was also planning to give a speech today on US-African policy at the University of Cape Town which is being billed by White House officials as a centrepiece event of his three-country tour of the continent.

The US has been keen to reposition itself as a major trading partner of Africa against growing Chinese competition, and to shake off a paternalistic image earned from decades of humanitarian and military interventions.

At a self-styled “town hall” meeting in Soweto, where young Africans from across the continent pitched questions to the president, Mr Obama won applause when he declared Africa was not “just one big piece of land on the map”.

He also spoke about the need for good governance to attract overseas investment and boost trade. Investors don’t want to have to pay a bribe or “hire someone’s cousin just to open a business”, Mr Obama said, addressing a student from Kenya where his father was born.

There were some skirmishes before his talk when about 100 students and activists protesting against his visit gathered outside the University of Johannesburg campus. Police fired stun grenades to disperse the crowd after an officer was struck on the head with a plastic flag pole.

While Mr Obama has been warmly welcomed to the country, many South Africans are critical of US foreign policy in north Africa and the Middle East.

Black South Africans are also acutely aware of the US’s support for the apartheid regime. The US removed Mandela from its terror watch list in 2008 - 15 years after he was awarded the Nobel peace price.

At the weekend, however, Mr Obama hailed him not only as “one of the greatest people in history” but as a “personal inspiration to me”.

“The outpouring of love that we’ve seen in recent days shows that the triumph of Nelson Mandela and this nation speaks to something very deep in the human spirit, the yearning for justice and dignity that transcends boundaries of race and class and faith and country. That’s what Nelson Mandela represents - that’s what South African at its best represents to the world, and that’s what brings me back here,” Mr Obama said.

At a press conference in Pretoria, South African president Jacob Zuma said he hoped Mr Mandela would be able to leave hospital soon as more optimistic reports emerged from family and friends.

Speaker of parliament Max Sisulu, who visited the former president at the Medi-Clinic Heart hospital in Pretoria, said “we are pleased with the progress Madiba is making”.