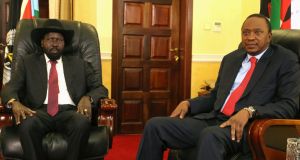 As Kenyan president Uhuru Kenyatta continues to burnish his reputation as a pro-western troubleshooter by brokering peace talks in South Sudan, he will be hoping such apparent indispensability could soon help him shrug off allegations of heinous crimes against his own people.

Judges at the International Criminal Court (ICC), where Kenyatta faces charges of crimes against humanity, are expected to rule soon on an application by the court’s prosecutor for a delay to the February 5th start of his trial – on the grounds that the evidence against him is no longer sufficient.

There have been angry accusations of witness interference on both sides. Kenyatta’s lawyers have previously asked for the case to be thrown out because, they argued, the evidence against him was tainted by false statements. The option to dismiss is still open to the judges.

The three-judge trial chamber will have to consider the dramatic admission before Christmas by the prosecutor, former Gambian attorney general Fatou Bensouda, that one key witness is no longer willing to testify, while another has admitted giving false evidence about a key event.

The judges will also have to consider Bensouda’s statement that she will use the three-month delay being sought to see if there is any new evidence – and, if so, whether it is strong enough to warrant a trial.

Fear and loathing
Given the climate of fear and loathing that the trial of Kenyatta and that of Kenyan deputy president William Ruto – which is already under way – have engendered in Kenya, it is possible that reliable new evidence six years on will be hard to come by.

Ironically, what the judges will not be allowed to consider is the political context: the fact that the Kenyatta case is now regarded as “the most important confrontation” in the court’s history, given the degree to which it has pitted the ICC against the African Union, which has urged Kenyatta to boycott the court as racist.

Only one conviction
The ICC has convicted only one person in its 11-year history: former Congolese warlord Thomas Lubanga, who was sentenced to 14 years in July 2012. All eight of its current cases are against Africans.

Both of these facts are endlessly debated. If the court were forced to abandon its first case against a sitting president, the blow to its credibility as an international institution would be immense.

It would not be lessened much by the argument, raised by victims of Kenya’s 2008 bloodbath, that the alleged failure of the Kenyan government to co-operate with the prosecutor might have been a significant contributory factor.

Kenyatta arrived in the South Sudanese capital, Juba, at the end of last week with Ethiopian prime minister Hailemariam Desalegn, also a vocal critic of the ICC, to set up the peace talks that began yesterday in Addis Ababa. Kenyatta is highly conscious of his role as a regional leader – important enough to speak regularly by phone to US president Barack Obama.

Too important, in fact, his lawyers argued, in the aftermath of the Westgate shopping mall attack by Islamists in Nairobi last September, to be cooped up in the dock at the ICC – and now too crucial to the future of South Sudan.