In Kenya, scarcity and drought are driving two tribes to go to war 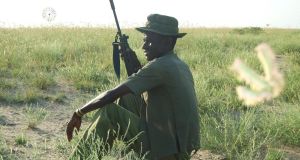 One of the armed watchmen who guards Fr Andrew Yakulula and his mission community in Todonyang in Kenya. Photograph: Bill Corcoran 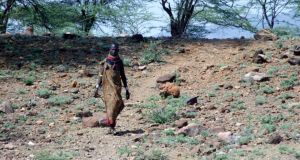 A Turkana tribeswoman on her way to Mass at the Missionary Community of St Paul Apostle in Todonyang, Kenya. Photograph: Bill Corcoran 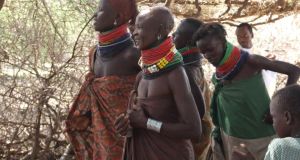 The air of tranquillity that dominates Lake Turkana’s desolate northwestern shoreline and surrounding rural landscape belies the severity of the tribal conflict gripping this part of the world’s largest permanent desert lake.

Temperatures of 40 degrees are common in this part of the Rift Valley, which remains largely untouched by civilisation’s modern trappings. Most people live in beehive huts made from grass and tree fronds; villagers still follow the traditional approach of fuelling their fires with dried animal dung.

Although the two tribes that inhabit this remote semi-arid region are culturally rooted in the past, their conflict provides the rest of the world with a glimpse of our potential future: one in which the predicted “water wars” are a reality rather than a hypothesis.

The nomadic Turkana, who take their name from the lake and live along its Kenyan shoreline, are at odds with the Dassanech from neighbouring Ethiopia. The latter, whose name translates as “people from the delta”, live across the border along the nearby Omo River delta.

Historically, conflicts between both groups were driven by cultural practices involving rites of passage whereby teenagers were tasked with killing members of the other tribe to prove their manhood – which, unsurprisingly, provoked revenge attacks from the other side.

However, in 2009 the tribal communities living along this 10km stretch of the lake, from the villages of Todonyang in Kenya to Sies in Ethiopia, began fighting a tit-for-tat conflict of a different nature: one rooted in climate change and the fight for scarce resources.

To date this localised war has claimed the lives of at least 61 Turkana, but no one in Kenya really knows the true death toll for both sides. Clashes are sporadic and sometimes go unreported, and the Dassanech casualty list is unknown to Kenyans.

Living at the epicentre of this crisis is Fr Andrew Yakulula, a Catholic priest with the Missionary Community of St Paul Apostle. Local Turkana communities asked his order to establish a mission at Todonyang to help bring peace to the troubled area, and alleviate the crippling poverty affecting it.

“Since then many Turkana people have died in fighting. Thankfully there have been no conflict-related deaths yet this year, but last year there were 10,” he said.

If this level of tribal warfare were not bad enough, there are growing fears the changing weather patterns and the Ethiopian government’s multibillion-dollar construction of three hydroelectric dams along the river Omo will intensify and spread the fighting throughout the wider tribal areas.

The Turkana are predominately pastoralists who also carry out a little fishing – particularly those living close to the lake. The Dassanech have a mixed approach to sustaining their lifestyle, utilising crop production, livestock and fishing.

Experts say once Gibe dams I, II and III become fully operational over the next couple of years, they will increase desertification and further reduce the area’s already scarce resources, especially if the flow of fresh water into the lake from the river Omo is substantially reduced.

Francis Emoru, Trócaire’s resilience programme manager for Kenya, explained that the river Omo is one of Lake Turkana’s three key inlets. Because of this, a reduction in the amount of fresh water into the lake, which has already been recorded, will increase its salinity, affect fishing grounds and reduce the size of the lake.

“It is affecting the fishing because the Dassanech and Turkana fishermen catch fish in the lake’s shallow lagoons, which are being reduced,” he said. “They are forced to go deeper into the lake to catch the fish but their tools are for shallow fishing. With fewer breeding grounds there are fewer fish, and this increases tensions.”

The worst incident of the conflict so far, which took place on May 2nd, 2011, has become known here as the Todonyang massacre, and it has left a lasting scar on the local Turkanas’ psyche, prompting many to move further down the lake’s shoreline away from the conflict zone.

At the time, the Turkana and Dassanech were bartering on the Ethiopian side of the border because of food shortages caused by drought. When the mainly women and children Turkana traders were heading home the Dassanech’s Merille militia attacked and killed 28 of them less than 1km from a Kenyan police station. Their mutilated bodies were left strewn across the dusty plains.

A retaliation attack was launched against the militia by Turkana warriors, and it has been reported by Kenyan newspapers that in total 46 people died that day.

“We collected and buried them at our mission cemetery, as the Turkana won’t touch those who die in battle due to cultural beliefs,” he said, before adding: “Our graveyard now has 62 people in it, and all but one died in this conflict.”

Paul Agis, a local from the area of mixed parentage, told The Irish Times that confrontations at resource points are made all the more dangerous because “everyone here has an AK-47”.

“The [nearby] conflicts in Somalia and South Sudan make it easy for us to get weapons. Someone can trade a goat for a high-powered rifle with ease,” he maintained.

Indeed, it seems that everywhere one goes in this region of herders and fishermen there is a man with a semi-automatic weapon cradled in his arms. Fr Yakulula’s mission is guarded by five heavily-armed watchmen who guard the community, including 160 children who attend its school safe.

“The problem here is that while everyone has a gun, they are not taught that their weapon should be primarily for defence rather than used as a means to solve disagreements,” he said bitterly.

First of two articles. Monday: The efforts to bring a peaceful resolution to the conflict.

This article was supported by a grant from the Simon Cumbers Media Fund.