Gilmore concerned by the violence, loss of life and the deteriorating situation in Egypt 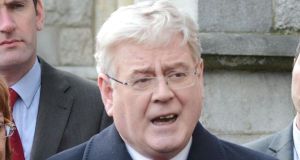 Tánaiste and Minister for Foreign Affairs Eamon Gilmore is to attend an emergency meeting of European Union foreign ministers on the crisis in Egypt later today.

Minister for Foreign Affairs Eamon Gilmore said today he had no information about charges brought against four Irish siblings detained during unrest in Cairo and is concerned for their well-being.

Mr Gilmore said: “Our interest here is the welfare of the four Irish citizens who have been arrested,” he said in an interview with RTÉ’s News at One from Brussels.

“We’re going to maintain consular contact with them and their family”.

Mr Gilmore also said that he was very concerned about the violence, loss of life and the deteriorating situation in the country.

“Europe has always had a very good relationship with Egypt,” he said. “This is an occasion where I believe that the European Union can act to help the situation”.

Nine foreigners including the four Halawa siblings, Omaima (21), Fatima (23), Soumaya (27) and brother Ebraheem (17) are among nine foreigners being investigated for charges including attempted murder, possessing firearms and belonging to a militant group.

An emergency meeting of European Union foreign ministers in Brussels today is expected today to shy away from making immediate cuts in financial aid to Egypt but several EU governments have pushed for the withdrawal of military support from Europe for Cairo’s army-backed rulers.

EU foreign ministers debated how to use their economic muscle to force the government to end a crackdown on deposed president Mohamed Morsi’s Muslim Brotherhood and resume talks over a peaceful compromise.

Western governments have struggled to agree a response since the army overthrew Egypt’s first freely elected leader on July 3rd. Calls for tougher international action grew louder in the past week after the Egyptian authorities defied Western pleas for restraint and ordered the storming of camps of Morsi supporters, in which hundreds of protesters were shot dead.

There may be little Europe can do to inflict hardship on the authorities with aid cutbacks because much of its cash goes to civil society groups, not the government, and Saudi Arabia has vowed to plug any shortfall if support is stopped.

Europe’s main concern in formulating a response, several ministers said, is to ensure its role as a mediator is protected and to prevent further escalation of the conflict.

“We have to leave the door open to doing that in the future,” he told reporters ahead of the meeting in Brussels.

The EU emerged as an important mediator in diplomatic efforts which ultimately failed to prevent the storming of the Brotherhood camps.

Its foreign policy chief Catherine Ashton was the first foreign official to see Morsi since he was put in detention, reflecting the EU’s image in Egypt as a neutral player, compared with Washington which is viewed with suspicion by both sides.

Dutch foreign minister Frans Timmermans said Europe should ensure it was in a position to facilitate talks “once the parties were prepared to talk to each other.”

“All the violence we have seen has put the radical elements on both sides in the driver seat and we need more moderate people to be heard again and to be able to play a role,” he said.

Diplomats said the ministers were likely to agree that any support from the EU’s €5 billion package of grants and loans should be kept as long as it is used to fund charities or civil society projects, as most is.

Some military aid could be withdrawn, although some governments have expressed concerns that the Cairo authorities may need some help in dealing with attacks by Islamist militants in the lawless north Sinai region, diplomats said.

Egypt’s main source of military assistance is the United States, which supplies its army with $1.3 billion a year, most spent to buy and maintain US-made weapons.

Britain has already suspended some joint work with the Egyptian security forces and revoked export licences. Hague has said in the past the EU could not rule out future assistance.

Underlining unease in the West over how to respond to the crisis in Egypt, the White House said on Tuesday media reports that it had cut off aid to Egypt were inaccurate although the policy was under review.

Western countries worry that abruptly cutting aid would shut dialogue with rulers of the most populous Arab country.