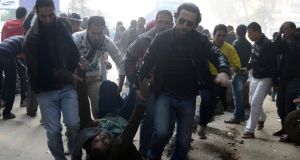 Supporters of the Muslim Brotherhood carry an injured protester who was shot in Cairo on Saturday on the third anniversary of Egypt’s uprising. Photograph: Reuters/Amr Abdallah Dalsh

Standing in the forecourt of Cairo’s Zeinhom mortuary, waiting to pick up the corpse of his friend, Amr Hussein could scarcely believe he was there.

“I thought we were done with this,” the 23-year-old said. “I thought the revolution would be the start of a new era.”

Hussein’s classmate, Mohamed Yehia, was shot dead by police on Saturday, the third anniversary of the Egyptian uprising – a day that was meant to be a celebration.

But for many it was instead one of protest and mourning, with officials confirming yesterday that 49 people had been killed in nationwide protests against the regime installed last July by the army chief Abdel Fatah al-Sisi. Fierce clashes raged in several neighbourhoods across the country, with armoured police vehicles charging at protesters in downtown Cairo.


Authoritarianism
Supporters of Egypt’s ousted Islamist president Mohamed Morsi, as well as activists opposed to the authoritarianism of both Mr Morsi and Gen Sisi, took part, and 1,079 people were arrested.

“This is not the Egypt that we are looking for,” said Ayman Abdelmeguid, a spokesman for the April 6 group, the secular youth movement that organised many of the first protests against Hosni Mubarak in 2011.

Violence of a different kind continued yesterday in the Sinai peninsular, where Islamist extremists ambushed and killed three policemen. It continued a militant surge against security forces that saw four bombs explode in Cairo last Friday, and an army helicopter allegedly shot down on Saturday.

Later in the day, the interim president, Adly Mansour, portrayed the situation as business as usual. He announced plans to hold presidential elections before parliamentary ones, a move that nudges Gen Sisi ever closer to a presidential run – and rejected the terrorist threat and concerns about the strength of Egypt’s democracy.

Mr Mansour said: “We are adamant – state and people – to eradicate terrorism and implement the road map for the future. My confidence in the Egyptian state and its institutions is unequivocal and unshakeable.”

olice are our brothers’
Many Egyptians agree. Hundreds of thousands filled Tahrir Square on Saturday to back Gen

Sisi’s security establishment, with several seen kissing policemen as they entered the square. Inside, there was a strong belief that a strong security state is Egypt’s only solution to the three years of political and economic chaos that followed the 2011 uprising.

“The police are our brothers, our people, our sons,” said a trader, Khaled Nasredeen.

For the activists whose protests against police brutality in Tahrir Square three years ago sparked the Egyptian uprising, the sentiment was galling. Abdelmeguid said: “It’s quite frustrating to see such a gathering in Tahrir Square. But we still believe that people will see the truth eventually and they fight again for their freedom and dignity.”

But in areas hit by violent protests over the weekend, residents said they merely hoped for a return to stability.

“Us ordinary citizens just want safety and security,” said Ali Abdel Samer, a shopkeeper in Mataria, north Cairo, where some of the fiercest clashes between protesters and police took place.

“They were not peaceful, and they just need to be fired on by the police,” said lawyer Maher Abdelmoneim, whose parked car was shot at during the clashes, something he blamed on demonstrators.

As usual in a polarised Egypt, there were competing narratives. A police spokesman said five policemen had been injured across Cairo, compared with 247 civilians. Another local man, who identified himself as sympathetic to Mr Morsi’s Muslim Brotherhood, denied that protesters had used weapons in Mataria. “They were shot at by snipers, and the cars were damaged by thugs who were protected by the police,” said Abdel Moneim.

Many expect tensions to rise further in the coming days. The police are unlikely to go easier on protesters – viewing the Brotherhood and the Sinai-based militants as one and the same. The extremists have threatened more attacks and the Brotherhood has promised to protest daily for 18 days.

“God willing we will get our revenge,” screamed a shaking Naget Mostafa yesterday evening, as the corpse of her dead brother, Abdallah, was carried out of the Zeinhom morgue.
– (Guardian service)