Text strips out Islamist-inspired language, parties could be banned outright 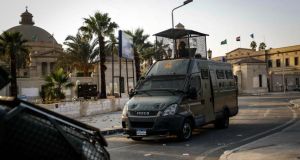 Egyptian anti-riot police outside Cairo University where clashes between the security forces and student supporters of ousted president Mohamed Morsi resulted in the death of one student. Photograph: EPA

Egypt’s new constitution would strengthen the army’s hand and could ban Islamist parties outright, according to a draft published in state media yesterday, though the drafting body missed a self-imposed deadline for finalising the text.

The constitution, expected to be put to a referendum in December, will be a milestone in the army’s plans for a political transition, due to culminate in parliamentary and presidential elections next year. It underscores the new balance of power after the military deposed Islamist head of state Mohammed Morsi in July following mass protests against his rule. The assembly has until December 3rd to finish its work.

The new constitution would replace one signed into law by Mr Morsi last year after it was passed in a referendum. That constitution was suspended when Mr Morsi, Egypt’s first freely elected president, was overthrown.

The assembly chaired by former Arab League chief Amr Moussa has only two Islamists, one member of the hardline Nour Party and the other a former member of the Muslim Brotherhood who backed the army’s move against Mr Morsi.

The source inside the assembly said the disagreements pertained to language in the preamble on Islamic law. But Mohamed Abolghar, a social democrat and assembly member, said the disputes included differences over language on the economy. “I don’t see any great difficulty left,” he said.

The army-backed government hopes to move smoothly along its road map to elections, aimed at restoring a semblance of normalcy to a country torn by the worst civil strife in its modern history.

“There are a few fault lines that need to be resolved,” said Zaid Al-Ali, a senior adviser on constitution building with International IDEA, a UN-affiliated organisation, who is following the process.

But he added: “There’s a general consensus among the people in charge that the deadline can’t slip, and it won’t slip.”

One protester was killed yesterday in clashes between Morsi supporters and security forces at Cairo University. The government passed a law on Sunday that places heavy restrictions on protests. In a sign the road map may yet be altered, an official said the authorities were considering delaying the presidential vote because holding parliamentary polls and forming a government may take longer than anticipated.

That scenario would extend the term of interim president Adly Mansour, seen by critics as a front for army rule. The timetable is already off: the original road map announced in July envisioned elections within six months.– (Reuters)