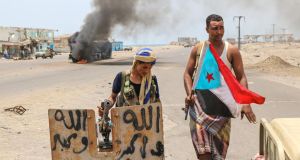 Fighters of the UAE-trained Security Belt Force stand atop a military jeep with a separatist flag in front of an oil tanker set ablaze during clashes between the separatists and the Saudi-backed government forces on the eastern entrance to Aden in southern Yemen on Friday. Photograph: Nabil Hasan/AFP/Getty s

A suicide bomber on a motorcycle killed six southern separatist fighters on the outskirts of the Yemeni city of Aden on Friday, witnesses said, part of a surge of violence that has complicated a near five-year-old war and undermined UN peace efforts.

Islamic State claimed responsibility for the attack on a patrol of Security Belt forces, a separatist front fighting Yemeni government forces for control of the port city.

The separatists and the Yemeni government forces are both part of a Saudi-led coalition battling the Iran-aligned Houthi movement, which took over most of Yemen’s cities in 2014,

But the separatists broke with the government this month, accused it of ties to Islamists and seized its temporary base of Aden on August 10th.

The fighting since then has exposed deep rifts in the coalition – the Saudis back the government while the United Arab Emirates, the alliance’s second-biggest backer, funds and arms Security Belt and other southern separatist forces.

Militant groups have also sought to take advantage of the turmoil. Islamic State has claimed responsibility for a series of attacks during the war, though there was no independent confirmation of its involvement in Friday’s blast.

The suicide bomber struck in Aden’s northern Dar Saad neighbourhood a day after the UAE raised the stakes by carrying out air strikes against government forces in southern Yemen.

The UAE said it had carried out “precise and direct” strikes on Thursday on what it called terrorist militias which it said had attacked Saudi-led coalition forces fighting at Aden’s airport.

Yemen’s government condemned the strikes which it said had killed and wounded more than 300 of its forces and a number of civilians.

Other parts of Aden were largely quiet on Friday after days of heavy fighting, with shops, restaurants and bakeries reopening and people attending Friday prayers.

The Saudi-led, Sunni Muslim coalition intervened in Yemen in March 2015 against the Houthis, who ousted president Abd-Rabbu Mansour Hadi’s government from power in the capital Sanaa.

Divisions have spread in a war which is widely seen as a proxy conflict between Saudi Arabia and Shi’ite Muslim regional rival Iran.

“The recent escalation of violence in Aden is a clear indication that once more, political and military interests are overriding the well-being and safety of the Yemeni people,” Jason Lee, Acting Country Director of Save the Children in Yemen, said in a statement. – Reuters